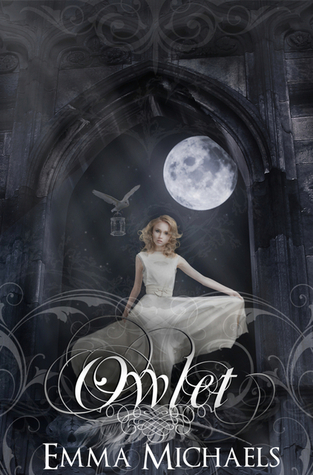 Author: Emma Michaels
Genre: Young Adult, Fantasy
Publisher: Tribute Books
Release Date: 13 October 2012
Pages: 178 (eARC)
Synopsis
Somewhere between falling and flying… there is a girl.
Iris has a secret. She lost her memory eight years ago and never told a living soul. After an asthma attack one night she finds out that her dreams of a strange house on a snowy island may be a memory resurfacing but the more she learns about the past the more she realizes the life she has been living is a lie. As the façade her father has built starts to crumble around her she will have to decide which means more to her; the truth or her life.
My Rating
* * * *
The Review
Owlet begins and ends with a dream and in between, the words have a singsong and dreamlike quality to them as if they are floating inside the mind of the reader.
I didn’t know what to expect from Iris and her story. It is so unique to read a fantasy book where the main character is asthmatic, dreams of flying and has more than a subtle conscience speaking to her about the life she no longer remembers.
While the reason behind Iris’s memory loss is not made clear, it is clear that Iris is being protected from humans that want her dead. Humans that are have birds as half-souls just like her. Iris was supposed to have dies as a baby because of what she was thought to be. But unconditional love made her parents want to protect her at any cost and that cost was not telling Iris who she really is.
Yet she dreams of an island she calls her Never-Never and flies to that island in her dreams and knows it like the back of her hand. When she finally gathers the courage to tell her father about the strange dreams, he is overjoyed and relieved. He decides to send her to the island with Diana, her caretaker telling her he’d join her soon and finally tell her the truth.
On the island, which is exactly like the her Never-Never, her mind tells her that she will also find him. He who has been waiting for her to find him and in her core she really knows him. Falcon was sent to harm her but he couldn’t do it and instead they fell in love as children. But then the dangerous circumstances and her memory loss made her forget him. Now he is adamant to never go through the pain of her not recognizing him.
Owlet is a very refreshing book in the fantasy genre. It isn’t long and when it ended I wanted to go on reading about the true self of Iris and what it means for Falcon. Though we only get to read about the secondary characters for a short amount of time, they really stick with you especially Diana and Nathanial. Emma Michaels is a talented author for having written Owlet with such an open mind and embracing the concept of the Stryx. I am looking forward to read more of her work.
Best Quotes:

“Closing her eyes for a moment, just wanting to clear away the tears from her lashes so that she could see Falcon clearly, Iris suddenly felt as though she was being pulled away from sweet oblivion as her moment of dreamless sleep slipped away from her and she felt snow against her skin.”

Emma Michaels can be found at

The giveaway is open internationally and there are lots of prizes up for grabs! Enter away.
a Rafflecopter giveaway

Thanks to Tribute Books for providing me a copy of Owlet for review.