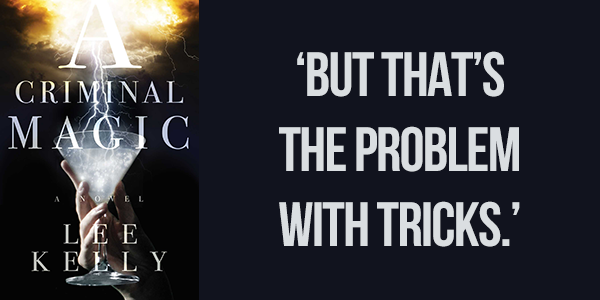 A Criminal Magic has a fantastic-sounding premise and a historical setting. Sadly, it couldn’t rely on either to make the characters or the story be any good. The magic aspect of this book is unique, though. Sorcerers perform magic which can then be siphoned off into bottles and drank basically giving people a high like drugs do. Therefore, it’s only natural that magic got prohibited wherein lies the whole story.

Of course, prohibition is never the proper solution so sleazy taverns are found all over the world and crime syndicates rule. Magic in A Criminal Magic works in a way that creating stunning illusions through magic means a better quality shine and a more addictive high. So when one of the crime-lords decides to put together a team of sorcerers to perform magic every night, all the moneys pour in. But what’s the catch?

Joan Kendrick has a dark secret which manages to constantly guilt her into being the responsible one and taking care of her family. Good enough, but it doesn’t really stop there since that guilt is repeated countless times throughout the book and when I actually got to know the reason behind it, I was so underwhelmed it wasn’t even funny. It also made me angry because assault was involved and honestly, a sorcerer being backed into a corner? Who are you trying to fool? Using any kind of assault as a plot device is never okay and is the biggest drawback of A Criminal Magic that I can’t look past.

Alex Danfrey, on the other hand, is an ex-criminal trying to be the good guy by helping the Federal Prohibition Unit bring down the shine underworld by working undercover. My issue with Alex is that he doesn’t really have a personality. More like a range of stereotypes strung together to form a swoony, perfect male character who just about everyone can walk on because hey, he’s just trying to be a good person. Please. I’ve just about had enough of those to last me a lifetime.

Still, how the team of sorcerers is put together, the tests they go through to be selected and the illusions they create are some of the things that I actually enjoyed. The imagery of a few of their performances is really stunning and I would actually read a book about those alone.

Anyhow, once the team comes together, power struggle starts to occur and of course, there’s animosity among them mostly because Joan becomes one hell of a talented sorcerer. However, talent means more danger of being used by other people and that’s exactly what happens with Joan. Who could’ve guessed, right? Joan gets roped into doing more for her crime boss than she bargained for and when she realizes why she actually got selected to be on the team, it gives her pause (well, several very annoying pauses). Meanwhile, Alex realizes that he has to choose between being the good guy or Joan so he’s also in a (very annoying) pickle.

I’ve to mention, though that there are siblings on the team who seem to be in love with each other? It was definitely implied that they’re siblings and that there’s something going on between them which, if really the case, disgusting.

In all, it’s actually sad how tiring it was for me to read A Criminal Magic as I was basically waiting for them to perform some magic and take me out of my misery. Also, the only villain I did like was a female crime-lord who was only in one scene. I’m pretty sure that with a different set of characters, a more solid story and a way better ending, this book would have been fantastic as fuck. What it actually is now, is a thorough disappointment.

‘I try to imagine what it must feel like, to have this world of magic hit you all at once, for the first time, not slowly during hours of careful rehearsal and improvisation to make it happen. It must truly feel out of this world.’

‘Joan is Gunn’s right-hand girl, not a damsel in distress, but the fucking distress itself.’