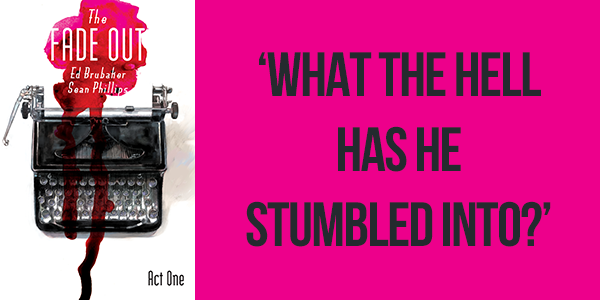 Charlie Parish is a burnt-out screenwriter on the brink of losing it after being part of the war and things in his line of work just taking a toll on him. So being the unfortunate first person to find the dead body of an up and coming starlet when he wakes up passed out after yet another wild party is just trouble he didn’t ask for. Thus, begins the murder mystery that’s pushed aside from time to time to make space for the many characters and to take a closer look at their not so neat little lives.

The most interesting thing about The Fade Out is how there’s no apparent antagonist because everyone is complicit in the sleazy ways of Hollywood of the late 1940s just because that’s what they are used to. A blacklisted screenwriter, a studio head who has taken part in many disreputable acts in his younger days, a replacement of the dead actress driven to extreme lengths to forward her career, no one is innocent. Sometimes though, someone like Charlie Parish comes along and gets themselves tangled up in the wrong side of things, questioning everything.

What really attracted me to The Fade Out is that artsy cover with the typewriter and the hot pink ink dripping down and converting into blood. Needless to say, I was expecting the art to be amazing and it is that, to some extent. It’s also textured and gritty and just not something I prefer.

While The Fade Out captures the essence of Hollywood and the Hollywood Blacklist era, it’s not the most original plot. Rather, the focus is on the atmosphere and the wide range of characters. It’s about the sordidness of Hollywood from drunken brawls to dirty dealings and murder coverups. Nothing is ever really that simple especially not when the main character has no idea just what he has stumbled into. The Fade Out keeps peeling off layer after layer delving in deeper with every issue and I hope it remains that way.

‘This was just how it was here… something in the air just made it easier to believe lies.”It’s like his brain wants him to remember just enough to stay miserable.’