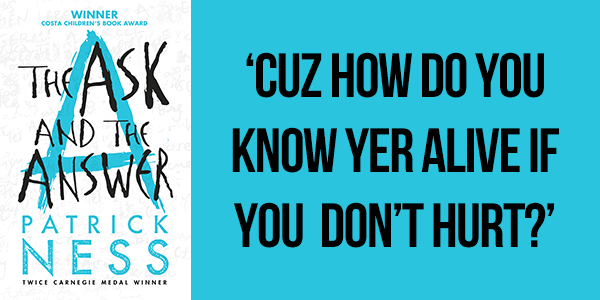 The Ask and the Answer is on a whole another level than The Knife of Never Letting Go. But also, it’s not. The backbone of what makes the series so profound and incredible remains the same, but the constantly shifting themes of human conflict, loyalty, choices, trust, and love only dig deeper as the series continues. Not only that, Ness multi-layered those themes with themes of terrorism, anti-feminism, genocide, sexism, war, oppression, and segregation making it one hell of a book. The Ask and the Answer comes jam-packed with feels and I don’t know how I survived through it.

The Ask and the Answer begins a short while after Todd and Viola were separated at the end of the first book. While I’ll never get over that ending, in their first moments in The Ask and the Answer, they ask about each other before anything else and honestly, who gave Ness the right to fuck with my heart and mind in this way. Not only that, the prologue is bone-chilling, nerve-racking and my second absolute favorite after that of The Dream Thieves which is saying a-fucking-lot.

Todd is back to his sorry start with no one at his side, locked into a tower with the mentally unstable Mayor Ledger, subjected to the eery calm of Mayor Prestiss’s scrutiny, and forced to pair with Davy Prentiss, of all people. Knowing how Todd is and then giving him the task of handling the Spackle just broke my heart. Todd obviously hasn’t recovered from his earlier encounter with the Spackle which makes for a hell of an interesting dynamic. Moreover, Todd is attacked on all sides by Mayor Prentiss, tricked, and haggled which makes his character arc one for the history books. This boy goes through hell and back and still absolutely refuses to lose his soul.

Viola has her own point-of-view and I would’ve died if this wasn’t the case as I finally got to know her in a way that wasn’t possible before. She’s one hell of a strong character who refuses to let anyone screw her over with bullshit. The things she does are just whoa. I adore characters who have a determined mindset and a set principles because then they refuse to bend to someone else’s. Yet they can be bent if forced enough which I found completely fascinating to read about as Viola struggled with this.

The secondary characters are flawed as fuck and so, so realistic and twisted that I found myself sitting with my mouth agape one too many times. Mistress Coyle and Mayor Prentiss are two sides of the same coin so to witness them playing mind games with Todd and Viola to get their respective ways is disturbingly upfront. The Spackle and the women are really the most heartbreaking parts of The Ask and the Answer and I just won’t ever be over them. This is what humans are capable of doing to each other and we see it everyday, but Ness shoves it in your face making you realize the consequences of every kind of action, good or bad, that’s ever been put out into the world.

I’m a sucker for books like The Ask and the Answer that takes the intentions and the actions of men and women alike and flip them on their heads. The plot twists in this book are amazing and wrecked havoc on my feelings one on top of another. The whole mystery surrounding the title of the book was just beyond my expectations. Chapter 41 and 42 are my favorites and I honestly should have expected that brutal as fuck ending. I didn’t and bye.

‘If you ever want to see how small you are in the plan of God, just stand at the edge of an ocean.’

‘You haven’t even seen me fight yet,’ I say, standing my ground. ‘I knocked down a bridge to stop an army. I put a knife through the neck of a crazy murderer. I saved the lives of others while you just ran around at night blowing them up.’

‘Faith with proof is no faith at all.’

He smiles. ‘You may have no choice.’
‘There’s always a choice,’ Viola says by my side.

‘It’s not that you should never love something so much that it can control you.
It’s that you need to love something that much so you can never be controlled.
It’s not a weakness-
It’s your best strength-‘

‘And what exactly do you think this proves?’ he spits. ‘You’ve got power, but you don’t know what to do with it.’
VIOLA
‘Looks like I’m doing fine,’ I say.

‘The boy who refused to lose his soul.’