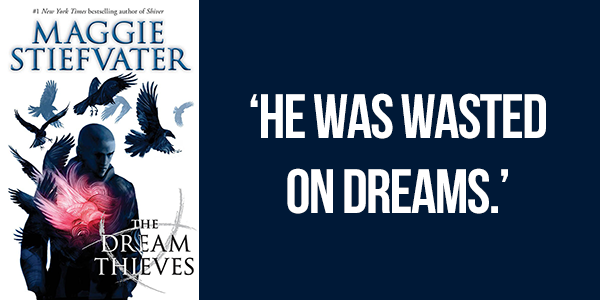 Simply put, The Dream Thieves is all about shifting themes; a study in what makes a person. Gansey’s issues with having too much and Adam’s issues with having nothing at all and losing what he has to Cabeswater. Ronan’s secrets and identity, Noah on the edge of existence, and Blue desperate to be something more. But most of all, the book hinges on a crossroads. From the beginning to the end, each of the characters are faced with an inner struggle that they must come face to face with. Ronan most than the others.

Richard Gansey’s slow progress in his hunt for the Raven king continues to unsettle him, but it all takes a backseat in the wake of Ronan’s confession. As a result, The Dream Thieves delves deeper into just how much Gansey’s friends mean to him and the extent he’d go for them. How he constantly worries while his appearance oozes enviable confidence. And as Adam Parrish teeters on the brink of constantly going the wrong way to define himself, Noah Czerny is barely there. Blue tries to persevere and just be as the women of 300 Fox Way gets involved with a stranger. But it is Ronan who lives with secrets, secrets that Kavinsky seems to be aware of. Oh Kavinsky, what a deviously delicious character. He is corrupted to the bone and it shows, he is what Gansey worries Ronan could turn into some day which Ronan thinks is a legitimate worry.

However, Ronan’s shifting self is the most fascinating self to ever exist on page. When awake, he is adamant about being truthful to the point of blunt as secrets thrum inside him. Secrets that come to life in his dreams; the one place they only ever do. He only admits to his secrets in dreams. He only has to realize that he needs to be able to love what he is and who he is in his waking life. Ronan, his secrets, and his desires drive his development as a character forward which is so layered and complex that I can’t help but love him the best.

The Dream Thieves is four hundred pages about a character who is finally trusting his friends enough to indulge them in his secrets. As much as The Dream Thieves belongs to Ronan, a small, essential part of it belongs to Adam, too. The eerie ambiance of the first book gives way to a more just-below-the-surface kind of quiet urgency that I already know I will want to experience over and over. The Raven Cycle is a series shrouded in mysteries and with every other book, it delves deeper into some while revealing others. Trust me when I say this book is the best of the series yet.

‘The second is a harder kind of secret: one you keep from yourself. Every day, thousands of confessions are kept from their would-be confessors, none of these people knowing that their never-admitted secrets all boil down to the same three words: I am afraid.’

‘And Ronan was everything that was left: molten eyes and a smile made for war.’

‘In that moment, Blue was a little in love with all of them. Their magic. Their quest. Their awfulness and strangeness. Her raven boys.’

‘Sometimes Ronan thought Adam was so used to the right way being painful that he doubted any path that didn’t come with agony.’

‘It was nothing, but it was Adam Parrish’s nothing. How he hated and loved it. How proud he was of it, how wretched it was.’