I’m so excited to be a part of #SimonVs blog tour because it’s one of my favorite books that I’ll be pushing everyone to read. Harry Potter and Elliot Smith obsessed Oreo-fiend, Simon Spier is my favorite this year. He’s also a hopeless romantic who can’t help his hilarious typos in flirty emails to Blue. I’m plan to reread it forever and ever and cannot wait to hold the beautiful hardcover in my hands.

Simon vs. the Homo Sapiens Agenda by Becky Albertalli
young adult lgbtq contemporary romance published by Balzer + Bray on 7 April 2015
Sixteen-year-old and not-so-openly gay Simon Spier prefers to save his drama for the school musical. But when an email falls into the wrong hands, his secret is at risk of being thrust into the spotlight. Now Simon is actually being blackmailed: if he doesn’t play wingman for class clown Martin, his sexual identity will become everyone’s business. Worse, the privacy of Blue, the pen name of the boy he’s been emailing, will be compromised.
With some messy dynamics emerging in his once tight-knit group of friends, and his email correspondence with Blue growing more flirtatious every day, Simon’s junior year has suddenly gotten all kinds of complicated. Now, change-averse Simon has to find a way to step out of his comfort zone before he’s pushed out—without alienating his friends, compromising himself, or fumbling a shot at happiness with the most confusing, adorable guy he’s never met.
Add Simon vs. the Homo Sapiens Agenda on Goodreads
Buy it on Amazon | B&N | Book Depository | IndieBound 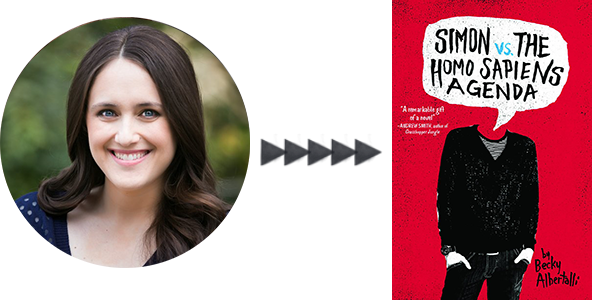 I’m so incredibly happy to have Becky on the blog today because I adore her! Case in point, we both had one day to get this post ready and she was so fast with her replies to my emails despite being so busy. Basically, she’s such an amazing person.

It says in your bio that you write ‘very nerdy contemporary young adult fiction.’ How did the very nerdy part came to be?

I LOVE this question, because the fact that you even have to ask is extremely flattering. I think I will always write about nerds, because I can’t even begin to imagine what goes inside the brains of cool people. Fact: Simon and his friends are nerds, but my own nerdiness reaches a whole other level.

As a clinical psychologist, how has your experience of working with teenagers influenced you as a writer?

I think it’s a mixed bag! Being a psychologist gave me the opportunity to get to know so many incredible teens, and I think it helped re-acclimate me to how teens talk, think, and interact. That being said, balancing the two roles has been challenging at times. I went from having basically no online footprint to being a public figure, and that alone has been a huge transition. Furthermore, in my role as a psychologist, teens have trusted me with really precious information, and it’s critically important that I never mine that for my fiction. Beyond that, I try to do everything within my power to make sure my former clients never feel vulnerable that their confidentiality could be breached. I won’t let it happen – that’s nonnegotiable – but I still worry that they think it might!

Simon vs. the Homo Sapiens Agenda is about so many things so this might be very hard for you to answer, but what’s your favorite part about it?

Hmm…I think my favorite part of this book is the love story. I loved writing the email chapters. I think I got a little lost in Simon and Blue’s relationship at times! And I feel like I’ve gotten to know them both so well over the past two years that it’s really special to see them get their happy ending. I truly believe that every Simon deserves to eat infinite Oreos and make out with the grammar nerd of his dreams.

That is, in fact, a trick question, because Simon is ALWAYS Oreo eater Simon (and Drunk Simon is especially Oreo eater Simon). I will resolve this dilemma by linking to this very informative Buzzfeed. Why, yes, I will be making these for my launch party.

Do you know you probably gave us all a heart attack with Martin’s involvement in Simon’s life?

It’s awesome to see so many diverse YA coming out this year! What’s your take on that?

I’m completely thrilled by it. It’s incredibly inspiring to see editors acquiring such a range of diverse titles, and especially to see the reading community responding to them with such enthusiasm and positivity. In my imprint (Harper’s Balzer + Bray), I can name four 2015 debuts off the top of my head that star LGBTQIA+ characters, and one of their huge contemporary titles this year stars a Turkish-American girl. I think this shift is so incredibly important and so desperately needed – and, thanks to influencers like the We Need Diverse Books team, I expect it will only continue to improve. Of course, it’s also important to acknowledge how much work there is left to do in challenging our tendency to default to white, straight, cis, male, non-disabled characters and authors. Nonetheless, I’m excited to be a part of that work.

Are you currently working on anything?

I am working on something! I’ve been in edits and rewrites for the second book of my two-book deal with Balzer + Bray, which I would describe as a loose companion book to SIMON. I’m hesitant to reveal much about it, since I keep making such dramatic changes as I rewrite. I’m hopeful that we can expect to see it on shelves in 2016.

Lastly, everyone should know that you are – ?

Beyond excited to launch this book. Incredibly, ridiculously grateful to all of those who have supported me along the way. Thrilled to be a part of this community. Looking forward to what comes next!
Becky Albertalli can be found at
| Website | Blog | Twitter | Goodreads | Instagram |

We may never now what the emboss on an Oreo cookie means but that surely isn’t stopping Simon or us from enjoying one or a whole pack of it. One lucky person will win a copy of Simon vs. the Homo Sapiens Agenda along with a package of Oreos. (Please do visit my policies page before entering!)
a Rafflecopter giveaway

Additionally, you can also win a personalized hardcover of Simon vs. the Homo Sapiens Agenda if you tweet how you eat your Oreos or Instagram a picture using the hashtag #SimonVs by April 6th. Yes, today’s the last day so get going!