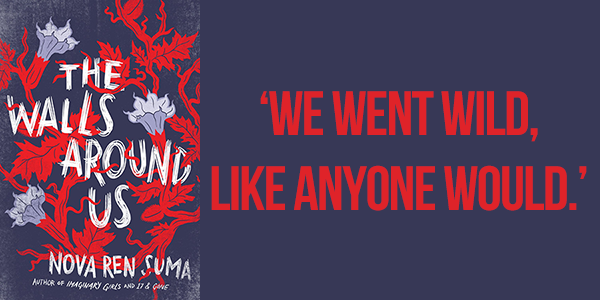 The Walls Around Us is a very peculiar story that builds to a crescendo—then shudders to a halt before starting up again to tie up all the loose ends. In other words, it reads like two different stories are on a collision course and when they crash, all hell breaks loose. Suma paints a very grim picture of a female juvenile detention center located in the middle of nowhere with no way out, but death. Yet that’s not all; coming from a small town with nothing out of the ordinary parents is Violet, a star ballerina whose claim to fame is built on the foundation of guilt.

The Wall Around Us begins with an odd glimpse into what happens when a bunch of girls, locked up in tiny prison-like cells, are set free. These are girls, some barely into their teenage years, with blood on their hands. Locked up in a juvenile detention center, Amber committed a crime none would expect a thirteen-year-old to commit. An expert at minimizing disturbances as best as a detente can, one strange night Amber is thrown in for a loop that forever alters the course of her sentence.

In stark contrast is Violet, living her dream of being enrolled into Julliard, which makes her an object of absolute envy in a town filled with narrow-minded and highly judgmental people. She’s pretentious, she’s unbelievable, and she’s wired to only make sure that nothing comes in the way of her future. She’s one of those friends Ori wished she had only to realize how wrong she turned out to be. Ori is the only common link between Amber and Violet; the kind of link that only gets stronger as secrets come to light, complicating things further even as they simplify.

Suma tells the story of what it does to girls locked up at such young ages with nothing but crappy food and savage personalities for company. It’s horrifying, it’s terrible, and it’s nothing to be proud of. Taking away freedom does strange things to a human being and stranger still to teenagers who are unable to understand the extent of their crimes. The life they could have had is replaced by years of resentment that stems from being ordered around in limited space. It’s self-destructive to an extreme especially when not all the juvenile detentes are guilty.

Gradual, pulsating and incredibly ominous, The Wall Around Us is a book that completely boggles the mind. Suma isn’t afraid to pose uncomfortable questions about human beings that are so far-gone that there could be no saving them, but who still hunger for justice, for freedom. If you ever wondered if teenage girls are capable of doing the unthinkable, look no further than the oddly psychological and incredibly thrilling, The Walls Around Us.

‘When people decide there’s ugliness inside you, they’ll be looking to find it on your face.’

‘She didn’t look like a killer at all to us, and this the opinion of killers.’