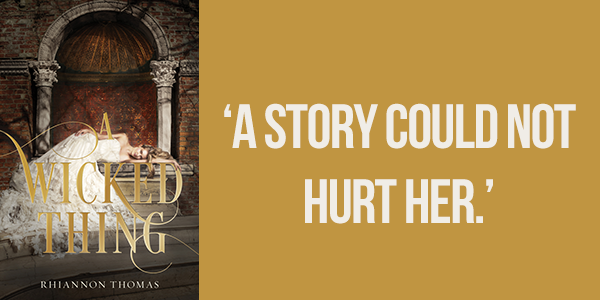 A Wicked Thing is one of those retellings that Rhiannon Thomas did something different with by taking a fairy tale and forwarding its plot. We all want to sometimes read on to find out what happened after the happily ever after because surely, all the troubles don’t just end. A Wicked Thing confirms they don’t. But as much as the concept is interesting and the twist to the fairy tale unique, I found A Wicked Thing lacking.

Aurora has been asleep for a century and as per the curse of Celestine the witch, has been kissed countless times by a number of princes only to be woken up by the most dull of them all, Prince Rodric. The people of Alyssinia rejoice for Prince Rodric is the son of King John the Third and Queen Iris of Falreach, the current rulers of Alyssinia.

As can be expected, Aurora is devastated to be woken up after a century only to find that the world as she knew it to be is no longer. Forced to marry a stranger within weeks and being warned by the Queen to not step out of line and do as expected from her, Aurora is reluctant, to say the least. Naturally, she tries to resist and prolong the inevitable wedding that is said to bring prosperity into the land of Alyssinia once again. As much as she wants her land to prosper, Aurora isn’t ready to sacrifice herself for the good of Alyssinia.

Feeling utterly trapped, Aurora sneaks out of the palace from the escape route in her tower for a few hours at night where she meets Tristan, a bartender. The next day, Prince Finnegan of Vanhelm arrives with an offer to help her escape her fate. Torn about who to trust and who not to, Aurora feels overwhelmed and starts to resent poor Prince Rodric as the one responsible for everything.

At first, Aurora is portrayed as naive and unaware who just knows that marrying the prince isn’t what she wants to do. The realization that everyone is out to gain something from her even from people she didn’t expect it from is a welcome one. The secondary characters aren’t fleshed out much as Queen Iris is mostly two-dimensional in her supposedly evil tactics and Prince Rodric is just meh. The only character that I did feel anything about was Prince Finnegan who hails from a country where dragons live. I do want to see more of him in the sequel.

As much as A Wicked Thing is character-driven, it hardly moves forward plot-wise and the shocking twists are only mildly surprising. When there’s hardly anything happening, one would think that that twists in the plot would be a welcome surprise, but they failed to blew me over. A Wicked Thing is a series starter and as series starters go, it promises a lot of awesomeness in the future, like dragons and a different side of Aurora as she discovers herself more. However, what I would have liked to see in A Wicked Thing is a gradual character development of Aurora instead of shocking-discovery-BAM-character-growth as well as going beyond to where the book just ended. In all, A Wicked Thing is an okay, nothing out of the ordinary start to a series that has a potential to be mind-blowing.

‘You’ve seen flowers, have you not? Such delicate things. A rough hand, a strong breeze, the slightest frost … they die so easily. Even left to their own devices, they shrivel and die so quickly. But a weed … a weed is strong. Almost impossible to kill. And if someone tries to destroy a wee,d it ill hurt them back.’

‘For a wild moment, she wanted to smear it over her face, hide that oh-so-beloved beauty under a taste of her messy insides.’