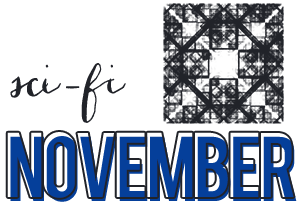 Take out your light sabers ’cause it’s that time of the year again. Last year, the month long event was hosted by Rinn and this year it’s being co-hosted by her and Oh, the Books!
Like last year, I wouldn’t be posting as much as I’ve yet to write the posts despite having written all my ideas down. I’m not a hardcore sci-fi reader or sci-fi anything, to be honest. Yet I do enjoy the genre thoroughly and some of my favorite movies are sci-fi like Inception, Avatar, The Adjustment Bureau, and Megamind. When it comes to books, I only recently read Ernest Cline’s Ready Player One before which I’ve only read YA sci-fi and Dan Brown books. I guess I got too distracted by YA fantasy to read much of anything? Oops. But sci-fi fantasy counts so it’s all good.

My plans for celebration of sci-fi aren’t as ambitious as they were last year because I always fail. Darn it.

Sci-Fi on a Screen

For all my love for the genre, there are some essential sci-fi movies I haven’t yet watched but really want to. I’m planning to watch all the X-Men movies and whoa, there are a lot of them (meaning that I might not watch all seven of them).

The Wolverine
X-Men: Days of Future Past

And oh, I’d be continuing watching Doctor Who.

It’s my goal this year to read at least one manga and I think I’ll go for sci-fi fantasy graphic novels. I was a huge Archie Comics reader and then I just drifted into the world of books without any illustrations.

The Wicked + The Divine Volume 1 by Kieron Gillen and Jamie McKelvie – This I really want to read because it’s totally calling to me.
Saga Volume 1 by Brian K. Vaughan and Fiona Staples – Everyone raves about this graphic novel series and now I’m curious.

There are some YA titles that I’ve been saving up to read in November which is basically Marissa Meyer’s The Lunar Chronicles. I’d be rereading Cinder because I really want to and Fairest releases in January so it also helps with that.

My plans are still under wraps so stay tuned!

Do you like sci-fi? Are you taking part in Sci-Fi November? What are some of your favorite sci-fi reads?