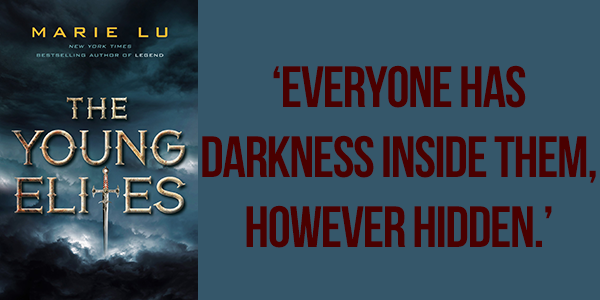 This book right here is not about a hero, it’s about how a villain is made and that’s the essence of The Young Elites. It’s everything I loved about it. Marie Lu crosses all boundaries of predictability and goes into the uncharted territory of shock and awe that many seldom cross. The Young Elites is the amalgamation of everything I’ve come to adore about the fantasy genre; the violence of Susan Ee’s Angelfall, the sweeping world of Sarah J. Maas’ Throne of Glass, the wickedness in V. E. Schwab’s Vicious and that something that sets The Young Elites apart from every other.

Adelina Amouteru is a survivor of the blood fever that took her left eye and marked her as a malfetto. It’s not a victorious survival for she is marred for life, and on the continent of Kenettra, being a malfetto is akin to a death sentence. Stripped of respect and his reputation as a merchant, her father went to extreme lengths to make Adelina show powers not of this world, to be worth something. To be a young elite. The constant abuse of his father, the love he showered her younger sister Violetta with, and the final straw which drove her to the edge. Adelina escapes from his prison only to constantly find herself behind more and more bars.

Teren Santoro is the Lead Inquisitor, working to eliminate all malfettos and always on the lookout for the young elites. His character surprised me the most. He is one of those who despises malfettos and he’s wicked to his bones. Self-righteousness drives him which is revealed through the changes in perspective. Teren’s definitely someone to fear because he doesn’t spare anyone who crosses him, least of all a malfetto who dared defy him. So seeing him on par with Adelina is something to behold.

Enzo Valenciano is the leader of the Dagger Society, one of the groups of young elites who hope to find more like them and plan to bring down the king and queen. There’s not much we get to know about him; he’s no open book and I preferred it that way because of the events that took place. There’s so much mystery surrounding him and all of his scenes with Adelina were underlaid with such power and sensuality that I wanted more.

The violence in the story is so well-crafted that I could feel the delicious darkness inside Adelina and oh, what darkness it is! It churns and churns and builds up into something that’s mindblowing. But the darkness is not limited to Adelina, oh no every character is dark and I supposed much of it is because of the kind of world they live in and what they have to endure on a day to day basis, I just know that I thoroughly enjoyed it. The secondary characters are well-defined especially Raffaele who I adored but it was Spider that I loathed. The next installment in the series is definitely going to be bigger and more badass and I just can’t wait to delve back into the world of The Young Elites. Marie Lu decided to wrench my happiness away and now I’m not quite sure what to make of that ending. And oh, that dagger on the cover? It actually shows up in the book.

‘Be true to yourself. But that’s something everyone says and no one means. No one wants you to be yourself. They want you to be the version of yourself that they like.’

‘No one ever gives me their kindness without hoping for something in exchange.’