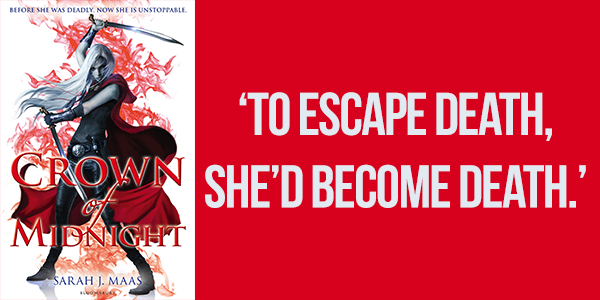 second book in the Throne of Glass series

Celaena Sardothien, royal assassin, is the King of Adarlan’s deadliest weapon. She must win her freedom through his enemies’ blood – but she cannot bear to kill for the crown. And every death Celaena fakes, every lie she tells, put those she loves at risk.
Torn between her two protectors – a captain and a prince – and battling a dark force far greater than the king, Celaena must decide what she will fight for: her liberty, her heart or the fate of a kingdom…

For a series that’s going to be half a dozen books long, realistically, one doesn’t expect the second book to rock one’s socks off. But Crown of Midnight does it so well that you don’t even know it has happened until after it has. I love Throne of Glass but I love, love Crown of Midnight. There’s a deeper exploration of everything that happens in Throne of Glass and some things that happened even before the events of Throne of Glass. There’s shock and awe and everything is so flawless and emotionally overwhelming and ah. You know a book is a definite favorite when you love it more after a reread.

In the first half of Crown of Midnight, Celaena Sardothien is the King’s Champion which Dorian and Chaol wanted her to be but not in the bringing-cut-off-heads-dangling-from-her-fingers way. But of course, it’s Celaena so nothing ever is like it seems because the person behind Celaena Sardothein is Sarah J. Maas. Celaena is closer to Nehemia more than ever but there are things they are not telling each other and everything is painful when the first half is over.

In the second half of the book, Celaena is so much more fierce and deadly and you don’t want to mess with that. I’m so much in awe of her I can’t even. She’s so broken and it shows that she’s had enough of everything and every one like that Ironteeth Witch, Baba Yellowlegs. Also, the scene where Celaena goes exploring the catacombs is one for the ages, so chilling. But then nothing can come close to outshining Celaena. Obsessed much, self?

Chaol is having a hard time keeping his feelings for Celaena under a tight leash and then they waltz together that one time, my heart just can’t take it. There’s also the birthday scene sigh. I ship ’em so hard. Chaol is such a loyal and brave character which clearly shows in the book. He does so much for Celaena and grows so much that it’s as much heartbreaking as it’s breathtaking.

Meanwhile, Dorian is having issues of his own and though we get to know the reason, I still didn’t like how his relationship with Celaena and Chaol changed in the beginning. Yet it was okay because by the end of the book, they kind of concile in a way. However, I have to say that I’m immensely intrigued by the change in him and just how did what happened happen.

Crown of Midnight is a fabulous sequel and the reason why I love the series as much as I do. It’s one hell of a ride. Her friendship with Nehemia is so much more strong in Crown of Midnight. I love them both fiercely and why did that had to happen because my heart hurt. The secondary characters are fleshed out and real and I wanted to punch some of them so hard like Archer Finn. Also, the King of Adarlan is something out of a nightmare. I’m basically left desperate for more awesome by Sarah J. Maas.

‘But death was her curse and her gift, and death had been her good friend these long, long years.’