I’d been rec’d books over the past year more than I’ve been all my life (thanks, Eve) so I thought it’s a good time as any to share them. But first let me share the ones which emotionally wrecked me and then the ones I hope will. 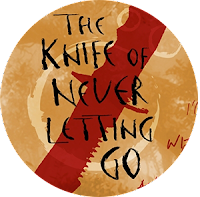 Joe Abercrombie’s Half a King is the latest recommendation by Aditi whose book photography is just so drool-worthy.
So have you read any of these and want to re-rec them to me? Now would be the time.