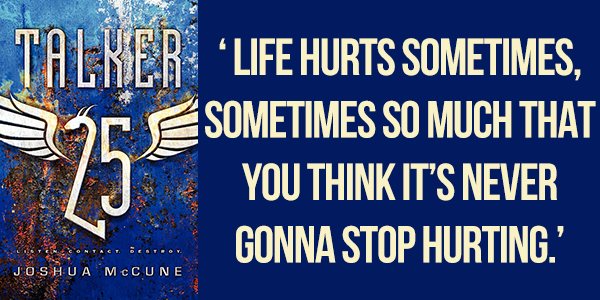 It’s a high school prank gone horribly wrong-sneaking onto the rez to pose next to a sleeping dragon-and now senior Melissa Callahan has become an unsuspecting pawn in a war between Man and Monster, between family and friends and the dragons she has despised her whole life. Chilling, epic, and wholly original, this debut novel imagines a North America where dragons are kept on reservations, where strict blackout rules are obeyed no matter the cost, where the highly weaponized military operates in chilling secret, and where a gruesome television show called Kissing Dragons unites the population. Joshua McCune’s debut novel offers action, adventure, fantasy, and a reimagining of popular dragon lore.

Talker 25 belongs on a shelf titled could-have-beens and that’s too bad. It promised one hell of an adventure with dragons and baby dragons, and a chilling, torturous happenings in the second half of the book. You ask what’s not to like? Well, for all the good things Talker 25 offers, it doesn’t offer a solid story at all and the role of the dragons is less than satisfying to read about.

Sadly, not much is said about the dragons themselves except their four types and survival preferences. It could have been so much cooler to actually be able to differentiate between the Reds, Greens, Blues, and Silvers. Only the Silvers are set apart from the others since they’re the offspring of two (I don’t remember which) other types and are baby dragons. They do sound pretty magnificent, though and I was particularly taken with Baby who sounds too adorable to be a dragon, baby or not.

The world-building doesn’t make all that much sense. It’s been fifteen years since dragons invaded earth; no one knows where they came from or what happened. Yet they do know that they can kill and make money off of them when they’re not even harmful? This is terrible world-building and considering the fact that the dragons can talk to some humans, it becomes downright pathetic because hello, utilize that weird aspect for something that doesn’t involve maiming and killing. But no.

The main character, Melissa, doesn’t break when the worst of the worst happens to her however, her actions are pretty frustrating, overall. Then there’s insta-love which immediately put me off because the guy she’s interested in is an insurgent. She hates insurgents since they side with the dragons but she’s still willing to save him because she met him that one time. Like, really? You’re more concerned about a random guy than about the fact that the government is after you?

The first half of the book is pretty random and I was glad that the second half picked up but I only enjoyed parts of it. The part where killing dragons is televised is pretty cringe-worthy. The mental torture that Melissa goes through is pretty disturbing and then there’s the government’s downright cruel way of torturing dragons. I usually like violence in books but Talker 25 failed to impress me in that aspect. Simply put, it is an unsteady read and I don’t think I’ll be continuing the series seeing how it turned out to be such a colossal disappointment.

‘Ironic. I’m here because of my inherent dangerousness, but it’s my inherent politeness that makes me put up with this. With him.’

‘Later is soon enough to remember what I am, what I’ve become.’