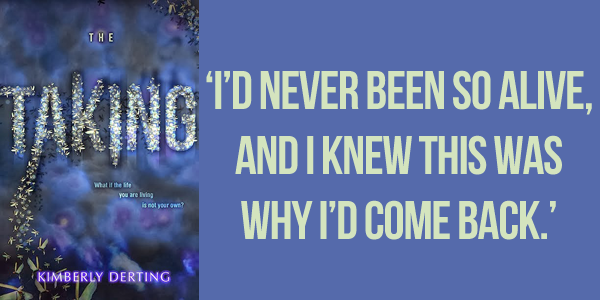 When sixteen-year-old Kyra Agnew wakes up behind a Dumpster at the Gas ’n’ Sip, she has no memory of how she got there. With a terrible headache and a major case of déjà vu, she heads home only to discover that five years have passed . . . yet she hasn’t aged a day.

Everything else about Kyra’s old life is different. Her parents are divorced, her boyfriend, Austin, is in college and dating her best friend, and her dad has changed from an uptight neat-freak to a drunken conspiracy theorist who blames her five-year disappearance on little green men.

Confused and lost, Kyra isn’t sure how to move forward unless she uncovers the truth. With Austin gone, she turns to Tyler, Austin’s annoying kid brother, who is now seventeen and who she has a sudden undeniable attraction to. As Tyler and Kyra retrace her steps from the fateful night of her disappearance, they discover strange phenomena that no one can explain, and they begin to wonder if Kyra’s father is not as crazy as he seems. There are others like her who have been taken . . . and returned. Kyra races to find an explanation and reclaim the life she once had, but what if the life she wants back is not her own?

The Taking is an engaging read but only if you can get past the falling-for-my-ex-boyfriend’s-little-brother part. I couldn’t get past it and so, I’m really the only to blame for wanting to read The Taking. I read the summary, I knew she was going to fall for Tyler AKA the little brother but, I guess I just didn’t pay attention. Also, it kind of reminded me of Jacob imprinting on Renesmee and not in a good way (spoiler alert: there’s no good way).

What makes it so creepy is the fact that, for Kyra, it only has been less than a day since she was 16 and forever in love with Austin before she disappeared. For everyone else in her life, it’s been 5 years since Kyra disappeared and they’ve tried to overcome her loss and eventually moved on, because that’s life. However, for Kyra, that’s unfair because she was pretty much having the time of her life at 16 and now everything is a mess. Then there’s the mystery of what actually happened to her.

Much of the first part of the book is slow because it’s all about how Kyra feels alienated (no pun intended) from her parents and that is true. She does feel that way and no one around her seems to understand this except Tyler. So, she naturally gravitates toward him and immediately starts having all these feelings for him. Tyler, on the other hand, seems like has been waiting for something like this to happen ’cause he had a crush on her and now has a way of actually showing it which ew. I did like all those chalk drawings he did for her though, but that’s about it.

Kyra could care less about why she hasn’t aged and what happened to her which really made me want to shake her because man, why are you so disinterested in your own disappearance? Her father has all these theories about what happened to her and when he mentions it to her, she freaks out on him. Really freaks out. Her mother is another issue because she really has a hard time connecting with Kyra after so many years. Understandably, Kya is angry with her but thinking ‘she’d squeezed out her new kid’ about your mother? Not cool.

What finally pushes Kyra to investigate her disappearance is another character’s approach when he basically saves her life by warning her on time. I still don’t know how I feel about the whole alien abduction part of the story and the ending was, in a word, predictable. For the plot to work, that had to happen. It finally clicked, though, the reason why Kyra fell so fast for Tyler. Yet I just feel like the The Taking was planned in a way that it works for the story but not the characters themselves and that’s just disappointing.

‘Sometimes those few seconds of hope were worth the crash back to reality.’