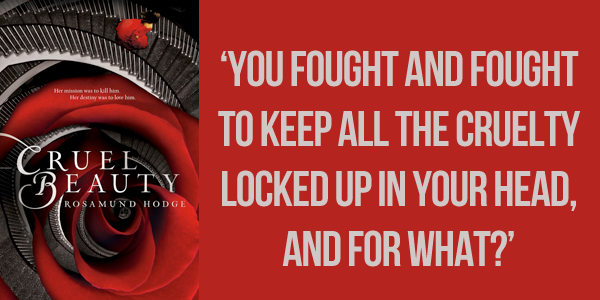 Since birth, Nyx has been betrothed to the evil ruler of her kingdom—all because of a reckless bargain her father struck. And since birth, she has been training to kill him.
Betrayed by her family yet bound to obey, Nyx rails against her fate. Still, on her seventeenth birthday, she abandons everything she’s ever known to marry the all-powerful, immortal Ignifex. Her plan? Seduce him, disarm him, and break the nine-hundred-year-old curse he put on her people.
But Ignifex is not at all what Nyx expected. The strangely charming lord beguiles her, and his castle—a shifting maze of magical rooms—enthralls her. As Nyx searches for a way to free her homeland by uncovering Ignifex’s secrets, she finds herself unwillingly drawn to him. But even if she can bring herself to love her sworn enemy, how can she refuse her duty to kill him?
Based on the classic fairy tale Beauty and the Beast, Cruel Beauty is a dazzling love story about our deepest desires and their power to change our destiny.

I was almost fully taken with Cruel Beauty. Almost. Despite having been thoroughly intrigued by the enchanting prose, I found something to be amiss from the story. A dark, intricate tale with a gorgeous cover, and raving responses; Cruel Beauty managed to deliver, but not all the way.
Once, the kingdom of Arcadia was fairly ruled by the heirs of Claudius. But then one night, the Gentle Lord descended upon Arcadia. The Sundering confined Arcadia to exist under a parchment dome for all of eternity. Adorned with a sun that doesn’t come close to the real one and demons that lurking in every shadow to keep the fear instilled, the only hope of Arcadia is Nyx Triskelion.
Leonidas Triskelion struck a bargain with the Gentle Lord and it turned out to be Nyx’s undoing. The bargain left him without a wife and two daughters; out of which one’s fate was sealed from birth. Brought up with a mindset to marry the Gentle Lord, Nyx has been taught the unusual Hermetic arts to nullify the hearts of four elements hidden in the castle, in order to collapse the castle.
But Nyx is indecisive and that indecisiveness goes a long way in overshadowing everything else about her. She resents her father for never loving her, loathes Aunt Telomache for involving herself in their lives, and envies her clueless sister, Astraia. So in her yearning for love, the barest of attention that Shade bestows on her is enough for her to get taken with him.
Trapped into living a life she didn’t ask for, Nyx spends her days exploring the castle looking for the hearts. However, the haunting castle never stops magically changing its inner layout which I found quite enthralling. Her failed attempts to kill Ignifex has only intrigued him to the point of respecting her efforts. He sees the malice in her heart which weakens Nyx. Haunted by his own demons with no memory of how he got there, Ignifex is enchanting but only to a limit.
Cruel Beauty promised to be dark and vicious with a blend of Greek mythology with a fairy tale retelling. I enjoyed reading the intricate details despite a very complex plot. But I found Nyx to be more clingy and repetitive than wicked and the romance to be off putting. Between an overwhelming world-building and an underwhelming ending, Cruel Beauty turned out to be a majorly bland read with some truly exceptional parts.

‘And you. Leonidas’s sweet and gentle daughter, with a world of poison in your heart. You fought and fought to keep all the cruelty locked up in your head, and for what? None of them ever loved you, because none of them ever knew you.’

‘They said that love was terrifying and tender, wild and sweet, and none of it made any sense. But now I knew that every mad word was true.’