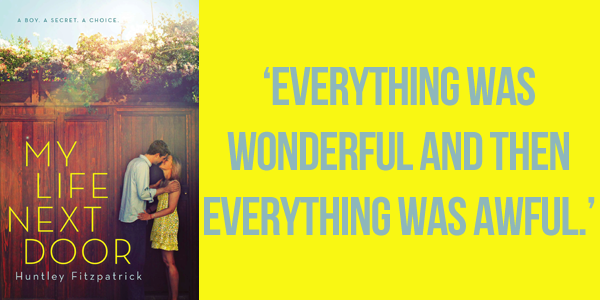 first book in My Life Next Door companion duology

‘One thing my mother never knew, and would disapprove of most of all, was that I watched the Garretts. All the time.’

The Garretts are everything the Reeds are not. Loud, messy, affectionate. And every day from her rooftop perch, Samantha Reed wishes she was one of them . . . until one summer evening, Jase Garrett climbs up next to her and changes everything.

As the two fall fiercely for each other, stumbling through the awkwardness and awesomeness of first love, Jase’s family embraces Samantha – even as she keeps him a secret from her own. Then something unthinkable happens, and the bottom drops out of Samantha’s world. She’s suddenly faced with an impossible decision. Which perfect family will save her? Or is it time she saved herself?

A transporting debut about family, friendship, first romance, and how to be true to one person you love without betraying another.

My Life Next Door is one-of-a-kind read of 2013 for me. No, not because it’s outstanding or extraordinary but because I went through the phase commonly known as everyone-loves-the-book-I-just-can’t-see-why. There were just too many factors at play and I was irked by almost all of them. I went into My Life Next Door thinking that I’d be awed by the characters, their story and of course, the Garretts. I wanted to admire Samantha and swoon over Jase. But as it turned out, for me, the story lacked the punch to blow my mind away.
Samantha Reed is a not-so-typical girl living in a not-so-typical neighborhood which could only be because of the loud and large family of Garretts. Having always been lived in a small family consisting of a mother who’s too busy trying to advance her career in politics and an elder sister Tracy, who’s too busy with her life. Samantha feels alone. Yes, she had Tim as a best friend once but his habit and an uncaring attitude towards her drowned that friendship. Samantha did almost nothing to save it despite feeling as if she should have at least tried. Then she found a best friend in Tim’s sister, Nana. Nana the ambitious one. It always comes back to bite you, doesn’t it?
Samantha’s summer days are going to be more dull than ever because of her mother’s constant lectures on how to fill her days working, Tracy leaving for her last-summer-before-college experience, Nana being too busy with her boyfriend and finally, the new man in her mother’s life, Clay Tucker. The name begs for some attention and instant suspicions sprout in her mind. Samantha accepts all this because she lacks courage to stand up and speak for herself to the point of being a pushover. Sometimes it seemed that she used to watch the Garretts just to spite her mother secretly. There had to be some solid issues than a parent just driving you to work harder for her to actually speak up on the said issues. So she continues her habit of watching the Garretts from the trellis outside her bedroom window. But this is the summer everything changes.
Jase Garrett is literally the boy next door; he’s gorgeous, caring and loving. But I wasn’t blown away by his words and I couldn’t figure out why he was interested in ‘a girl with a trust fund.’ You know there’s going to be some serious complications. I was honestly more interested in the eldest Garrett, biker Joel. What I did like about Jase though, was the way he really cared for his family. Alice always found a reason to whine about babysitting and what not but Jase’s feelings about his siblings are genuine. The guy really has no flaws and I admired the way Huntley Fitzpatrick portrayed the budding relationship of Jase and Samantha.
Out of the Garretts, George Garrett is the best part of My Life Next Door. His curious questions is what made me enjoy this book as much as I did. Honestly, he’d be the sole reason for me reading the sequel. But there is another reason: Tim. He’s raw and actually tries to improve himself. These two are the reason I liked My Life Next Door as much as I did. Nana seemed like a bad news to me early on and I hated how that dealt with. Alice had quite a spunky attitude which I liked a lot. Mrs. Garrett is another character that I admired.
However, the involvement of her mother and Clay Tucker with the Garretts just seemed fake to me. The whole thing could be realistic but the way they were handled is most certainly not. It bothered me to see how Samantha reacted to a very grave situation, I so wanted to shake some sense into her. Yeah, I understand her desire for love and attention which were so easily attained when the Garretts were around. She clearly suffered under her disguise of being the responsible and sensible child and I could see the appeal of living life the Garretts way. They didn’t stop their children from pursuing whatever they wanted to, they gave their children the freedom. So yes, she belonged more in the Garretts household than she ever did in her home. I liked that part, it’s the drama that really put me off. In the end, all the characters made up for the conveniently dramatic storyline in the book. Sometimes it’s just hard to genuinely connect with a book and sadly, this was one of those times.

‘Maybe if I can just sleep for a hundred years, I’ll wake up in a better story.’

‘It’s as though I don’t make a ripple as I drop off the face of the earth.’