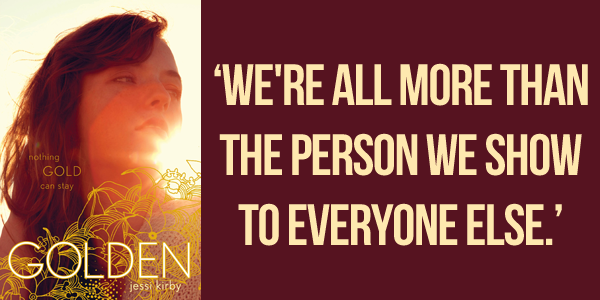 ABOUT THE BOOK
Golden by Jessi Kirby
young adult contemporary road trip published by Simon & Schuster on 14 May 2013
Seventeen-year-old Parker Frost has never taken the road less traveled. Valedictorian and quintessential good girl, she’s about to graduate high school without ever having kissed her crush or broken the rules. So when fate drops a clue in her lap—one that might be the key to unraveling a town mystery—she decides to take a chance.
Julianna Farnetti and Shane Cruz are remembered as the golden couple of Summit Lakes High—perfect in every way, meant to be together forever. But Julianna’s journal tells a different story—one of doubts about Shane and a forbidden romance with an older, artistic guy. These are the secrets that were swept away with her the night that Shane’s jeep plunged into an icy river, leaving behind a grieving town and no bodies to bury.
Reading Julianna’s journal gives Parker the courage to start to really live—and it also gives her reasons to question what really happened the night of the accident. Armed with clues from the past, Parker enlists the help of her best friend, Kat, and Trevor, her longtime crush, to track down some leads. The mystery ends up taking Parker places that she never could have imagined. And she soon finds that taking the road less traveled makes all the difference.

THE REVIEW
There are books that leave you feeling breathless, then there are the ones that leave you feeling overwhelmed. The ones that leaves you restless like a thought that has come to a halt after reaching a point of realization and words that die on your lips. Golden left me feeling all three of these and more. So much more. A ‘love and a question.’
Each chapter begins with a line from a poem, the words just enough to travel inside the words written on the page. The beautiful, beautiful words which made me fall in love with the book. I’ve always been attached to words. Silence is something which will always be something you put in a corner and pick it up from time to time. But words, words are alive, the center of the being. Especially written words because they’re a mixture of silence and sound. The words of Julliana Farnetti.
Parker Frost is someone I could’ve been a few years back if I haven’t gathered my bearings and took a stand to study something in life that I wanted to instead of just driving myself crazy in order to become a doctor. It’s just something I thought I needed to become so I completely understand the choices she makes and why.
However, Parker is one of those who needs proof they can see and feel before they can believe in something. It is stupid yes, but for certain things in life, it’s all you need. A shock, a trigger, a flash and belief is there. Just like Kat’s believe in carpe diem.
Kat, the one I admire so much. She’s one of those people who make you realize that it’s okay not to be perfect and do your own thing. A reminder like that never hurts because really, it is all about seizing the day which cannot be done if we’re acting on choices others make for us.
In between Parker’s hesitation and Kat’s boldness in life, Trevor Collins proved to be awesome. Really, there is no other word to describe him. His words are full of smiles and are true to the core. He’s substantial and real and yin to Parker’s yang. Chasing after the mystery of the love that was, it’s beautiful to read about the love that could be.
Golden is one of those books that do more than just tell a story. They change something inside of you. As I read Golden, I was reminded that poems are essential in life. They’re the fire and ice of words in life. And in the end, ‘nothing gold can stay.’ But y’know what? I’m glad the words of Golden will forever stay inside me.
THE QUOTES

‘But it seems to me that the experiences that stay with you, the things you’ll always remember, aren’t the ones you can force, or go looking for. I’ve always thought of those things as the ones that somehow find you.’

‘I sink into it completely, letting everything else fall away so all that’s left is this. A moment like a poem.’