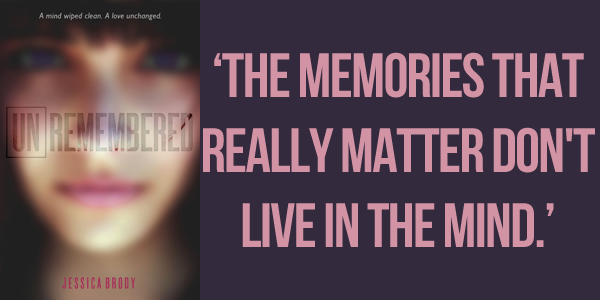 ABOUT THE BOOK
Unremembered by Jessica Brody

With no memories and no identity, the sixteen-year-old girl who was found floating among the wreckage of a devastating plane crash knows only one thing for certain: nothing is what it seems. Crippled by a world she doesn’t know, plagued by abilities she doesn’t understand, and haunted by a looming threat she can’t remember, Seraphina struggles to piece together her forgotten past and discover who she really is. But with every clue comes more questions. And she is running out of time to answer them. Her only hope is a strangely alluring boy who claims to know her from before the crash. Who claims they were in love. But can she really trust him? And will he be able to protect her from the people who have been making her forget?

THE REVIEW
I had been crazy excited for Unremembered ever since I discovered its existence. What really attracted to me about Unremembered was the main character being the lone survivor in a plane wreckage with a definite memory loss. I thought it didn’t get any better than that. Only it got worse. I wanted to like Unremembered, I really did. But I just couldn’t connect with it. Despite being just over 300 pages long, it took the book more than 250 pages to finally pick up its pace.
Not only that, I felt there was a lot of repetition. It’s one thing for Zen to find her but it took more than a few meetings for him to finally say something substantial to her. I know people are lying to her and what not but I wanted to scream at her to believe the guy already. More so when she almost trusts the wrong guy.
I also had a lot of issues with Cody. He’s supposed to be this 13-year-old foster brother but he acts like he’s Seraphina’s age fellow. He drives cars and can apparently leave and come home whenever he pleases. And it doesn’t help that he has a bit of an attitude despite his claims that pretty girls tend to look through him. Naturally, there is a lot of talk about the supermodel beauty of Seraphina which I got tired of really fast.
Seraphina is a pretty decent character; she doesn’t have a sense of belonging and only a meager amount of clues. She talks in foreign languages without even realizing it and she is this super smart math geek with an urge to count everything around her. However, she lacks depth which could’ve not been the case. Her thought process is predictable and she isn’t memorable at all.
Zen is the love interest and though we only get glimpses of how they fell in love, it is clearly not enough. He doesn’t have much of a back story so you really don’t get to know him. There’s the Sonnet that they just keep repeating throughout the book and the warm feeling Sera gets in between her eyebrows. Their romance is just really unbelievable somehow.
Just when I was about to give up on Unremembered, it decided to get better. The whole mystery was unveiled and while a lot of questions were answered, some are left unanswered. I was quickly awed by the whole mystery of how Sera ends up in the wreckage and who she’s running away from.
Honestly, if the whole book could have had more depth, I’d have definitely loved it. I loved how it ended, I finally felt the ohmigodyes feeling right there. And that was the Seraphina I was hoping to read about. So while I’m not giving up on the series, I just hope Unforgotten is way better than Unremembered.
THE QUOTES

“Forgetting who you are is so much more complicated than simply forgetting your name. It’s also forgetting your dreams. Your aspirations. What makes you happy. What you pray you’ll never have to live without. It’s meeting yourself for the first time, and not being sure of your first impression.”

“Death is not a memory you can fake.”

Thanks to MacKidsBooks for sending me an ARC of Unremembered.