Despite my evergreen love for the road trip genre, I haven’t read that many books from it (this a great Goodreads list to get started). However, road trip books are so good that it’s pretty easy to fall in love with more than one character. So here’s my list: 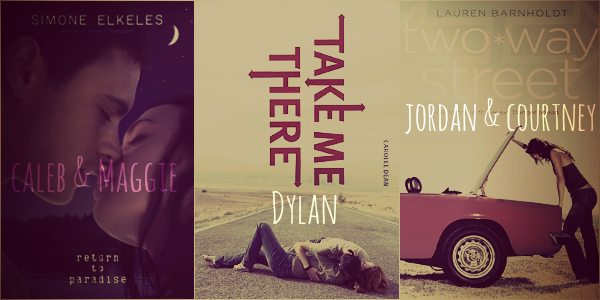 Caleb and Maggie from Return to Paradise by Simone Elkeles

Take two characters who have more than a rocky history together and put them together in a single bus on a summer trip. It only spells disaster and emotionally drained. I liked Caleb because of his intimidating yet gentle and reserved nature. Whereas despite Maggie having a lot to deal with, she is willing to forgive Caleb. I found this to be very intriguing and they get to open up to each other which gives a deeper meaning to their actions.

Dylan from Take Me There by Carolee Dean

I connected with Dylan; his restlessness, his failed attempts at trying to understand himself, his fate, his redemption. You know it in your heart that he is utterly genuine but trouble is only at arm’s length when it comes to him. It is so gut-wrenching to see him trying so hard to succumb to his fate and fighting it at the same time. It undoes you and spectacularly so.

Jordan and Courtney from Two-Way Street by Lauren Barnholdt

Two-Way Street is a fun book. It has two characters who are broken up but unable to escape the circumstances of their break up. They still have a trip to college to survive ’cause apparently you can’t break up and not have it come bite you in the ass the next day.

So it is hard not to love Jordan who is helplessly in love but his hands are tied and Courtney who is seething with jealousy over Jordan’s made up girlfriend. The jibes, jealousy and the hilarity of the two characters easily made them one of my favorites. 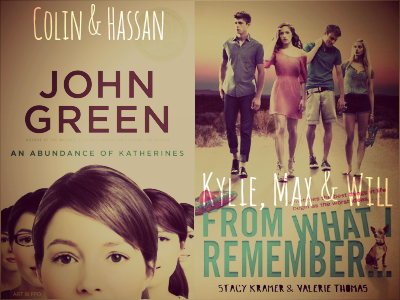 Colin and Hassan from An Abundance of Katherines from John Green

These two are a perfect pair unto each other. They can honestly live together happily ever after. Colin is awkward, socially inept but crazy smart and he knows facts! I totally related to him on that level. I love knowing and telling facts and statistics (not like Sheldon’s does) so it was awesome to see Colin do that.

And Hassan is comfortable in his skin which is what makes him so likable in my book. Also, it was great to read about a Muslim character and from John Green’s point of view. I just didn’t like the way Hassan kept calling Colin kafir; that is so not acceptable.

Kylie, Max and Will from From What I Remember… by Stacy Kramer and Valerie Thomas

I adore this book so it’s no wonder that out of the four main characters, three are my favorite. Kylie is a favorite ’cause she has that not-concerned-with-others look about her and she is damn smart! She likes to keep with herself or the people she is comfortable with which is so me.

Max was such an asshole at first but then I got to know him and the guy had depth he wasn’t showing! He almost did a complete one-eighty as the story progressed. I said almost because he gets confused in between and I wanted to shake him out of it. Generally, he is a milder Noah Hutchkins and hot.

Will is the coolest character ever (second to only Wesley Rush from The DUFF). He likes to party and could act like the laziest person ever when everyone else is panicking. I wouldn’t have minded reading the whole book from his point of view or even reading one of him only. The best gay character as yet (along with Cinna from The Hunger Games).