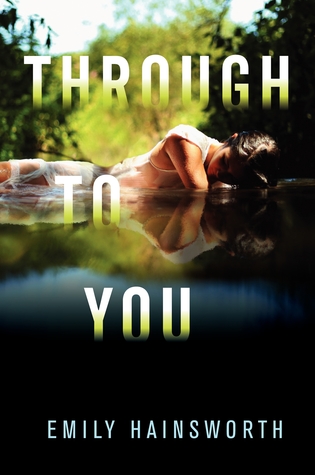 Title: Through to You

Author: Emily Hainsworth
Genre: Young Adult, Sci-Fi, Thriller, Contemporary
Publisher: Balzer + Bray
Release Date: 2 October 2012
Pages: 194 (eARC)
Synopsis
Camden Pike has been grief-stricken since his girlfriend, Viv, died. Viv was the last good thing in his life: helping him rebuild his identity after a career-ending football injury, picking up the pieces when his home life shattered, and healing his pain long after the meds wore off. And now, he’d give anything for one more glimpse of her. But when Cam makes a visit to the site of Viv’s deadly car accident, he sees some kind of apparition. And it isn’t Viv.
The apparition’s name is Nina, and she’s not a ghost. She’s a girl from a parallel world, and in this world, Viv is still alive. Cam can’t believe his wildest dreams have come true. All he can focus on is getting his girlfriend back, no matter the cost. But things are different in this other world: Viv and Cam have both made very different choices, things between them have changed in unexpected ways, and Viv isn’t the same girl he remembers. Nina is keeping some dangerous secrets, too, and the window between the worlds is shrinking every day. As Cam comes to terms with who this Viv has become and the part Nina played in his parallel story, he’s forced to choose—stay with Viv or let her go—before the window closes between them once and for all.
My Rating
* * *
The Review
Grieving, moving on, trying to get through every day when everything becomes a chore, a mechanical movement of limbs; it’s all for everything and nothing. Life would have been a lot easier if there was a chance to see how it could all go beforehand. How it would all be if you didn’t lose that one person who was holding it all together for you. There are countless ways in which your life can turn out, unlimited scenarios out there and only two words that can get you there in your mind: what if. The term that can manage to throw logic out the window. Only it does. In Cam’s case.
Camden Pike had everything in Vivian Hayward even if he wasn’t in with the popular crowd or the star quarterback anymore. It simply didn’t matter. It mattered even less when Viv died and Cam life got way out of his comfort zone and into a series of uncomfortable interactions with a psychiatrist and unnecessary notes in the fruit bowl from her workaholic mother.
There is only one place in all of Fayetville where Cam feels closest to Viv and that is at the exact spot she died. Where they put up a memorial two months ago. Mike doesn’t get it, willing him to join the team, which is not very plausible given the condition of Cam’s leg after the injury and how they both quit football together; him as the quarterback and her as the cheerleader. But then everything changes when Nina stumbles upon the parallel universe and sees Cam. Only she seems to know him and Cam has never seen her before.
The window between the two parallel worlds is there for a reason which Cam sees as the best thing that ever happened to him when he discovers that Viv is alive there. But Nina seems to be dousing his happiness and warning him to not cross the window over and over. It’s clear to see where Nina is coming from and I was definitely intrigued about the part she plays in the book. She’s obviously the sensible one yet she has an aura of sadness around her. As if she is trying hard to live less life.
Cam is very dignified when it comes to honoring Viv and it’s clear that he’s having a hard time letting her go. But Cam is in a downward spiral, he needs to have the sense to be realistic but it’s easier to do the opposite. To close eyes and see Viv smile instead. It’s interesting to see him trying to get past the crossroad trying to decide between his desperation for wanting to be with Viv and trying to get away from everyone.
But he knows that Viv is all he wants and the feeling is mutual. But even if it seems like she’s the same Viv, it isn’t. Cam see glimpses of a person who feels like a stranger to him and given the situation, it isn’t surprising seeing she’s from a parallel world. Yet the mind cannot stop but wonder what would make him not stay if Cam found the person he thought he’d lost forever? Even if that person was not exactly like the person Cam lost. It seems as if there is an obvious solution to the question but once a layer is removed with such a thought, it becomes complicated.
I admired the way Emily Hainsworth took hold of the concept and wrapped it around Cam’s story. It was gripping to read the book and towards the end, I had no idea how it was all going to play out. Being a character-driven story, I found Through to You to be a bittersweet read. The subtle way in which differences in Cam’s Viv and the other Viv starts showing up is done brilliantly. The descriptions of the different-yet-same parallel worlds is unnerving enough to bring weird thoughts in your mind and make it seem almost real.
Best Quote:

“It doesn’t matter why I want to leave. You’re the reason I want to stay.”

“I’m in that place between waking and sleep. The one where everything’s still black and peaceful until it gets invaded by my thoughts.”

Thanks to Balzer + Bray and Edelweiss for providing me an eARC of Through to You for review.