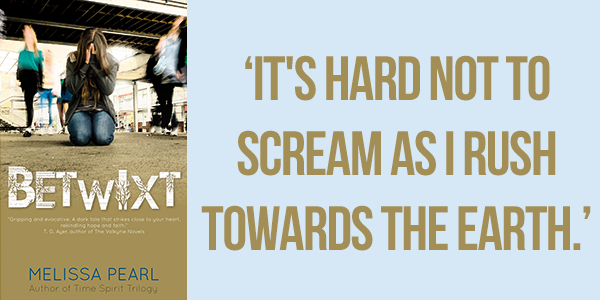 Beautiful, wild-child Nicole Tepper is hit by a car and left for dead. But when she wakes the next morning, Nicole finds herself in bed without a scratch. Perhaps she was more intoxicated than usual, as her mother is giving her the silent treatment and her friends are ignoring her as well.
Things take a turn for the weird when Nicole soon discovers she is actually hovering between life and death. Her body is lying in the forest while her spirit is searching for anyone who can hear her. Unfortunately the only person who can is Dale Finnigan, the guy she publicly humiliated with a sharp-tongued insult that has left him branded.
Desperate, Nicole has no choice but to haunt Dale and convince the freaked-out senior to help her. Will he find her body before it’s too late? Or will the guy who tried to kill her with his car, beat him there and finish her off before anyone finds out?

Even though Betwixt is little over 200 pages long, it managed to stir up a range of emotions inside me. The story begins when Nicole was out partying as usual but then things turned from bad to worse when her boyfriend Trent leaves her stranded in the middle of nowhere. More annoyed than frightened, she starts walking down the road cursing, gets hit by a car and wakes up invisible to everyone but Dale Finnegan. With no memory of what happened last night, Nicole really thinks she is doomed.
On the surface, Nicole seems like the run of the mill popular, mean girl in high school who spend her days partying and staying out late at nights. She has almost convinced herself of the persona she adopted ever since Jody. The tree that Nicole tried to avoid looking at in order to forget the pain of what happened. To be mean and rude so people end up hating her which is so much easier than letting them see the damage in her.
There are little revelations along the way, as the discovery for Nicole’s body continues with Dale’s help. Being invisible to everyone except Dale, Nicole gets to see the true face of all the people in her life. When the initial shock wears off and search efforts go futile, Nicole gets the overwhelming feeling of deserving to die. To never be found. But it’s more about the journey of getting to her body than the destination. Especially when she drifts inside her body from time to time and the unbearable pain makes her realize the grave situation she is. She might just die if no one finds her in time.
Dale is a unique character in the book, he has an easygoing aura around him and the fact that it’s difficult for something to get to him. He might just have a scar running down one side of his face but he feels more proud of it than ashamed. No one know how he got it. He attempted to talk to Nicole before but she more than harsh with her and he finally had to let go. So when he comes across Nicole’s voice in school, despite being wary of her he decides to help her.
For all the time Nicole spends with Dale, she actually likes it but is afraid to admit so. Saddened by her parents initial reaction of her running away, Nicole goes through strong emotions when her parents consider the graveness of the situation as days pass. Dale and Nicole try to locate her body and find themselves more times at a standstill than they’d have preferred. However, when Nicole catches two people trying to find her body to bury her, things starts looking up.
The time Nicole and Dale spend together, confiding in each other and just being together is stirring. When Nicole gets to look at her life from the outside, she realizes how empty it really has been. And she knows why. It’s heartbreaking and gut-wrenching when her parents finally realizes that Nicole is worse off then they’d believe. What pulled them apart is part of the mystery and same goes for Dale and his headfirst approach towards life.
Betwixt is an engaging story of the time Nicole spends in between the state of living and dead. Will she survive and whether she would amend her falling out with her parents is an engrossing discovery. Betwixt is a thought-provoking book which jolts the reader’s mind to question the existence and why do we choose what we choose. Melissa Pearl has written a beautiful story of not just surviving life but living it. Yet for all that Betwixt offers, it’s a forgettable story because of its genericity.

‘I can feel the clock ticking with excruciating slowness as we wait for a resolution. It’s almost more painful than my wounds.’

‘And I want to kiss you every day, but not just because I’m saying goodbye.’ 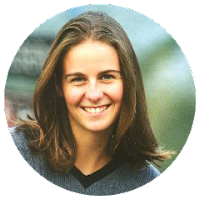 Melissa Pearl was born in Auckland, New Zealand, but has spent much of her life abroad, living in countries such as Jordan, Cyprus and Pakistan… not to mention a nine month road trip around North America with her husband. “Best. Year. Ever!!” She now lives in China with her husband and two sons. She is a trained elementary teacher, but writing is her passion. Since becoming a full time mother she has had the opportunity to pursue this dream and her debut novel hit the internet in November, 2011. Since then she has produced three more books with her fifth novel, Betwixt, out in November 2012.
Melissa Pearl can be found at
| Website | Twitter | Facebook | Goodreads | Publisher |
Buy Betwixt
| Amazon | Amazon (Kindle) | B&N | The Book Depository |

The giveaway is open internationally and there are lots of prizes up for grabs!

Thanks to Melissa Pearl and ATOMR for providing me a copy of Betwixt for review.