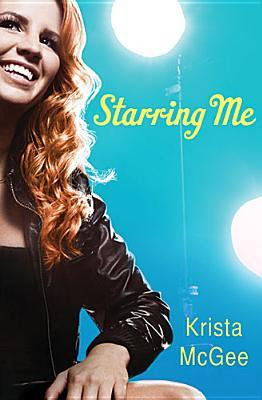 Author: Krista McGee
Genre: Young Adult, Contemporary
Publisher: Thomas Nelson
Release Date: 10 July 2012
Pages: 320 (eARC)
Synopsis
Kara McKormick is told she’s auditioning to star in a new teen variety show. But it’s what she isn’t told that could change her life.
The feisty New Yorker moves to sunny Orlando to participate in a month-long audition, where she’ll live with nine other contestants and an eccentric housemother. Kara knows that the show already has a big-time celebrity lined up for the co-host, but she doesn’t know who it is.
Chad Beacon quickly rose to fame after winning America’s Next Star, but he doesn’t want his entire career to be about singing. There is so much more he wants to do-like act. The new variety show sounds like the perfect next step for him, but his parents want him to have a co-star who shares his faith since they’ll be spending so much time together.
Acting is high on Kara’s priority list. But a relationship with God? Not so much. In fact, she’s tried to stay away from anything religious. But God is after Kara’s heart and He’s put people in her life who are showing her there’s far more to Christianity than rules and judgment.
And just when it seems that Kara’s going to have to give up her acting dream, God reveals that she may have a starring role after all-in a story so big only He could write it.
My Rating
* * * *
The Review
All Kara McKormick wants is to be an actress. With a talent of blending perfectly into her character that brings her a thrill of performing, Kara believes she has it all. But does she? When she doesn’t have an agent and the her only claim to fame is being on The Book of Love.

So armed with a passion for acting and a determined will, Kara goes to audition for a show when she gets a call. All she knows is that she will be competing with nine other girls and at the end, one girl will get her own SNL-ish show with a famous male co-star. The show that will broaden her horizons like she always wanted.

Starring Me is more about the auditions than the show itself so there are actual scripts in between chapters which are just amazing to read. I got excited every time there was one because they are funny and witty.  Kara is a very humble and likeable character; I liked getting to know her and the way her mind worked. She’s friendly, confident and knows what she wants but she can also be such a girl when it comes to certain things. I admired her strong emotional side and the fact that nothing can deter her from her path. However, she will put all the stops if it has something to do with her family.

Then there is Chad. I liked that I got to know his part of the story as well. His personality is very mature and fame hasn’t really gotten over his head. His parents are protective of him and he respects that. I loved the part about him being home-schooled, it all sounded pretty cool.

The roles of Addy, Jonathan, Flora and Kara’s family compliment each other and I liked how it all connected and fell into place for Kara. Flora is a very wise character however much her appearance says otherwise. Addy and Jonathan each play a significant role in Kara’s life in the book because she never knew what was missing in her life until she started questioning. It isn’t about the belief in God alone, it’s about the willingness to do something. Anything. Determination is key.

In all, Starring Me is a light summer read complete with competitive girls willing to stomp on you to win, killer auditions, a best friend who gets red in the face every time a certain boy is mentioned, a cool bibliophilic housemother, a strong love for family and a dream of a lifetime. I enjoyed reading Starring Me a lot. Really, it’s as much about the journey as it is about the destination itself.

“Cleansing tears poured from her cheeks and she let them flow, feeling a sense of peace like she had never known before.”

The Giveaway
Thomas Nelson has generously offered two copies of Starring Me for giveaway. Rules are in the Rafflecopter widget.

Thanks to Thomas Nelson and NetGalley for providing me Starring Me for review.