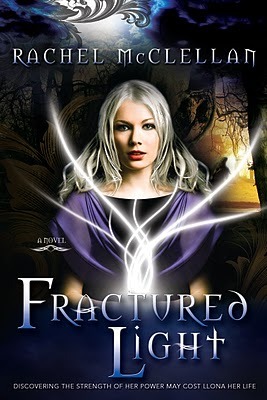 Synopsis
I’m dying, I thought. This was unexpected and not at all how I envisioned my death. I was supposed to die gardening in a flowerbed as a hundred-year-old woman, not as a seventeen-year-old trapped in a lake beneath inches of ice.
Llona Reese is used to living on the run. After the Vykens killed her parents, she knew they would eventually come for her too. She can’t take any chances. But when she starts to make friends for the first time in her life, she gets careless and lets her guard down. Big mistake.
As an Aura, Llona can manipulate light and harness its energy. But if she wants to survive, Llona will have to defy the Auran Council and learn to use her power as a weapon against the Vyken whose sole desire is to take her light. Now she’s caught in something even bigger than she can understand, with a power she can’t wield, and no one she can trust, except, just maybe, a mysterious stranger.
In this breathtaking and romantic adventure, Rachel McClellan delivers a truly mesmerizing story that will keep you guessing to the very end.

* * * *
The Review
I have always been fascinated with conflicting concepts; happy and sad, day and night, sweet and sour, you name it. So it wasn’t surprising for me to be drawn to a book about fighting darkness with light. It always make me think about mean people trying to bring down the bright ones, to take out their lightness of being just to feed on their satisfaction. Needless to say, Vykens are exactly like that to the Auras.

Llona Reese, an Aura, is an unpredictable character; losing her parents have left her with a determination to live life and not succumb to the charms of belonging to one place. A place that could be called home. Survival is her utmost priority therefore, moving constantly from one place to another is the only option. But now things are changing ever since she and her uncle, Jake moved to Bountiful, Utah almost a year ago. A subtle friendship with May and keeping her head down most of the times is how Llona has chosen to spend her last year at high school.

I liked Llona and how she trusts her ability to defend herself and play with danger, inviting it to get closer. As Llona discovers her abilities, she finds herself wanting to make use of the Light within her. Llona is not whinny and her life is not defined by falling in love with an unlikely character and then sulking about it. Sure there is a subtle romance in the book but it is neither overbearing nor does it overshadow the main plot.

Christian’s sudden interest in Llona is strange enough to make her question it because she’s had her fill of trusting others too easily. Christian is a complex character and even though Llona knows where she really stands with him, she cannot help but be drawn to his gentleness. That being said, the overprotective nature of Christian annoyed me at times but then that’s what it really was, his nature.

The secondary characters in the book were so well-defined and well-developed that I recognized where they were coming from; that’s how sophisticated is the style of writing. Honestly, some of the parts were creepy enough that I cringed reading them especially because it was after my 4 am. I rarely get scared reading there’s-someone-lurking-in-the-dark scenes but this book made me draw back in fear. Case in point: “The last of my bravery shattered to pieces when the paint directly in front of me began to peel back as if a claw were scraping it away—on the inside of the glass.”

Packed with intense action, unpredictable twists and an inevitable fate that brings her closer to her mother’s killer every day. The combination of whitish blonde hair, Llona’s stubbornness to use Light as a way of helping others and the normal day-to-day stuff of dealing with mean jocks, being a part of a book club and going to prom is pretty enticing. The story progressed at an uneven pace but it was easy to catch up to it. Fractured Light is Llona’s journey to embrace her true self and to become invincible from invisible. A spellbinding read you just don’t want to miss reading!

“My struggling body reminded me of a gazelle after it’s been captured by a cheetah. It always made me mad to see how easily the gazelle would give up after struggling for just a short time, as if it knew it didn’t have a chance. I didn’t think I had a chance either, but I wasn’t about to stop fighting.”

“There was a dark part of me, hidden deep within, I felt growing like the stretched shadows of night when the sun sets across the horizon. It frightened me, but I reasoned it had something to do with what I’d endured, and given enough time it would go away. I hoped.”