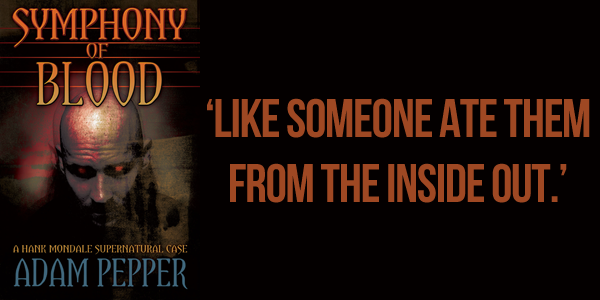 Hank Mondale, a rough-around-the-edges P.I. with a small drinking problem and a large gambling problem, needs a break. With his landlord threatening eviction and his bookie threatening worse, things look bleak. Until real estate mogul Thomas Blake calls with an incredible story: a monster is trying to kill his daughter. Hank figures she’s probably some whacked-out spoiled brat, but desperate, Hank takes the case to track down the supposed monster. It seems that people around Mackenzie Blake are disappearing. It’s obviously no coincidence. Was Hank hired to unwittingly aid a wealthy murderess? Or is there really someone…or some thing, trying to kill Mackenzie Blake?
A symphony plays that only It can hear. But there will be a special performance, just for her.

Symphony of Blood started off pretty normally where the main character Hank Mondale is introduced. A very unusual PI in that he has a big alcohol addiction and a smaller gambling problem. He is so not your typical protagonist; much more like an anti-hero. So it does not come as much of a surprise to learn that he is barely scrambling by, owes money to shady people involved in even shadier businesses and has a dumb kleptomaniac secretary. This should have bothered me, but then considering that Hank Mondale is pretty much depraved of any redeeming qualities himself; it was okay. However, it did bother me when he didn’t try to keep up a good relationship with his mother.
Moving on with the story. Hank Mondale looks like a cop, behaves like one and pretty much have the whole cop act perfected to a tee. But he can never become one which is why he has contacts to help him get a decent job in the worst of times. Yet the contacts couldn’t help him this time around. So when he gets an offer from a rich business man involving his snob of a daughter, he jumps at the chance. Little does he know what’s in store for him.
The whole symphony of blood element is presented here and though it is gross to read about the things that trigger the symphony, the book offers something unique from this perspective. But moving onto the character of Mackenzie Blake. I so did not like her! She is not only immensely annoying, but she is worse because she is a true egomaniac with very fake blonde hair. I mean, who calls themselves a ‘mommy’ of their pets? Thomas Blake, her father, is much the same though. See a genetic link here?
Anyhow, moving onto to It or Symphony. I really liked It. I liked how Adam Pepper developed him and his abilities of adapting to human life, of wanting a companion in his lone life, of being scared of its prey, of having weaknesses despite being scary at the same time. It gave a new perspective to the concept of monster. The element of music in the whole process was refreshing to read about and I really liked everything about the monster. The gory, horrendous details were horrifying to read about but they made the book thrilling to read.
In all, Symphony of Blood is a good read. It is a short book and if you’re looking for a paranormal thriller book to read this is the one to pick. Adam Pepper has sure set his image as a frighteningly fresh author in the genre.

‘Suddenly, It understood a new emotion, one It had seen the humans display but could never make any sense out of until that very moment: Rage.’

Thanks to PNR & UF Goodreads group for providing me a copy of Symphony of Blood for review.