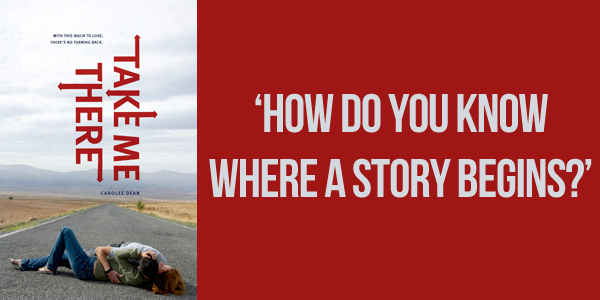 Dylan has a bad-boy past and a criminal record. He knows that rich, beautiful Jess is way too good for him—but she has always been the one person who sees through his tough exterior and straight to his heart, and he has been hopelessly in love with her from the first time they met. He would change his life for a chance with her.
But trouble follows Dylan wherever he goes, and a deadly mistake soon forces him to hit the road and leave his dreams behind. He’s on the run and in search of answers—answers to questions he wishes he’d never asked.

Take Me There
is a moving story
about a boy
who is bad.
But tries hard
to stay right,
to clean the sins
off his heart
and the grease stains
from his hands.
Because he knows
as he lives on,
so does hope.
I never read a book with such raw, deep and exhausting emotions before. I never expected Take Me There to overwhelm me like it did. There is so much to the story, so many words that it is impossible not to break while reading it. It made me go, like Dylan said, into the ‘darkest place I’ve ever been.’ The only difference was that the place was inside of me and Dylan’s story set it alight with fire.
It was very tough for me to go on reading because there was just so much of emotional baggage involved. As one chapter dissolved into another, the story got more and more raw with emotions.  It was like Dylan is fighting the cuckoo clock time bomb. He is never at rest and doesn’t believe that redemption is written in his destiny. But he tries anyway. You see, Dylan truly believes that he is a bad person, which he is because of the acts he committed. But he is more genuine than the purist man on earth. This is the beauty of Take Me There.
He screams for answers and his brain pours out words after words. Words he wishes would go away because he doesn’t want to deal with them. He has to, in any way possible. He wants to make an honest man out of himself, but is always just an inch away from it before trouble catches up with him. ‘How far can you go down the wrong path before you can’t get back on the right one?’ The question burns through his mind every moment of his life and he wants to know the answer before it is too late for him. Or maybe it already is.
Initially, it was the cover of the book that caught my attention and then the synopsis. The book never failed to surprise me; there are so many issues for Dylan to deal with that I felt I wouldn’t be able to keep up. But I was. Every time. Because Dylan’s story got adrenaline pumping through my blood. His words made me fall into love with the ideas swimming around in his head. He desperately needs to love and to be loved. I have never liked a character so much since Jennifer Parker from Rage of Angels. But I’ve got to say, it is breathtaking to read how Dylan discovers who he really is as he succumbs to the words inside him.
Suffice it to say, Take Me There has the power of undoing your insides.

‘I got words in me, Jess, fighting to find a way out. Sometimes there’s so many words and they get so crowded in my skull I think my head is gonna explode. I want to write them down. I’ve tried, but most of the time my thoughts and my feelings are bigger than what I can get on paper.’

‘Words are like people, I think. Put too many of them too close together and they cause trouble.’