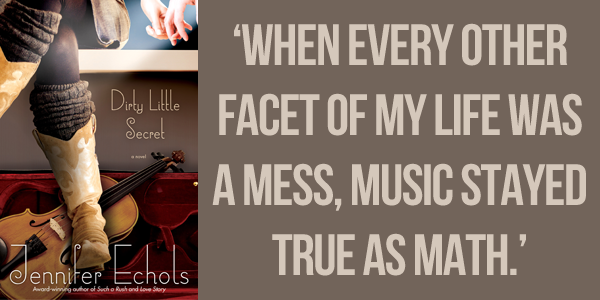 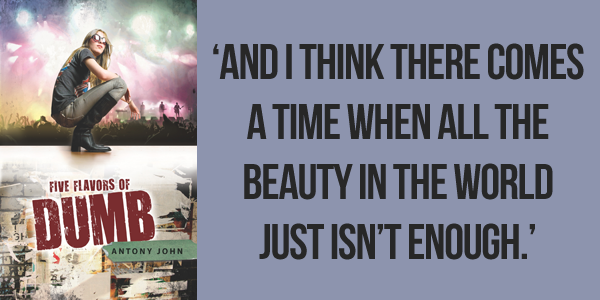 The Challenge
Piper has one month to get a paying gig for Dumb—the hottest new rock band in school.
The Deal
If she does it, she’ll become manager of the band and get her share of the profits, which she desperately needs since her parents raided her college fund.
The Catch
Managing one egomaniacal pretty boy, one talentless piece of eye candy, one crush, one silent rocker, and one angry girl who is ready to beat her up. And doing it all when she’s deaf. With growing self-confidence, an unexpected romance, and a new understanding of her family’s decision to buy a cochlear implant for her deaf baby sister, Piper just may discover her own inner rock star.

Wow, this book is freaking awesome! Five Flavors of Dumb crosses a threshold that at least I never thought could have been crossed. Yes, music is all-consuming and doesn’t require proper functioning of the senses to feel it. But Antony John showed just how it is done; how it is possible to feel the rhythm in your heart and believe in it. There could have been no way for Piper to hear Dumb’s music, but that wasn’t what mattered most when it came down to managing the band.
It all started with a seemingly dumb event at the school’s steps and eventually, rolled out into a grand moment in the lives of the people connected to the band. The title bothered me throughout most of the book, but then I discovered the real five flavors of Dumb. Antony John is a genius for creating such a beautiful and impressive piece of fiction. Five Flavors of Dumb is not about incapabilities or limits. It’s about what you are capable of when you know that your limits extend to far greater lengths than you ever imagined.
Piper is one strong lead character and I never would have thought that I would appreciate a color called ‘Atomic Pink’ in a million years but God, it inspired me! Each one of the members of Dumb and even Piper’s family contributed so much life into the book that it would have been impossible to imagine Five Flavors of Dumb if even a dialogue was changed.
I am in complete awe of Five Flavors of Dumb and of the author, Antony John who dares to take on a subject as fragile as deafness and make it rock. The book is a story about the change that happens when ‘suckiness’ is shed off in order to embrace ‘coolness.’ I was very pleased how the author trashed the stereotypes about rock-able geeks, soft beauty, rock star inclinations, pretty boy smiles and silent rockers.

‘Don’t worry about wanting to change; start worrying when you don’t feel like changing anymore. And in the meantime, enjoy every version of yourself you ever meet, because not everybody who discovers their true identity likes what they find.’

‘COOL·NESS [KOOL-NIS] -noun
CATCHING your mom gazing at the crazy crowd like she finally gets it
WATCHING your dad head-banging like he’s Finn’s twin brother
LEARNING that your new friends Tash and Kallie are a thousand times more complicated than you realized, and loving them for it
FEELING every one of your boyfriend’s pounding drumbeats, and thinking it’s the most romantic music ever written
REALIZING you’re completely unique . . . even in a crowd’