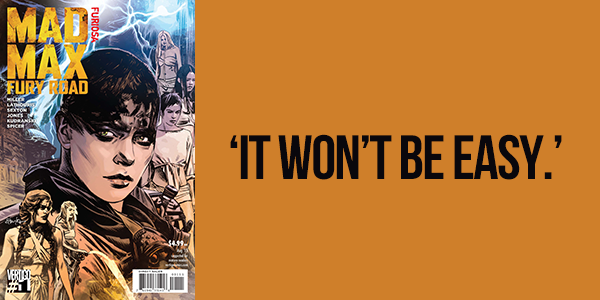 High in the Citadel there exists a bio-dome of clean air and pure water, protected from the toxicity and anarchy of the Wasteland. Here the warlord Immortan Joe keeps his most prized possessions – his wives – imprisoned for his pleasure and his insistence that they bear him healthy male heirs.

Then, amid this cruel depravity, an unlikely rescuer emerges…the Immortan’s most lethal warrior: the Imperator Furiosa.

From the mind of George Miller, the creator of the Mad Max trilogy, the prelude miniseries to the upcoming film Mad Max: Fury Road continues!

Ever since I watched Mad Max: Fury Road in May, I’ve been obsessed with it. It’s a fact that if I think about the movie for longer than 30 seconds, I’ll find myself on a Furiosa high. So when I got to know about there being a prequel comic exploring the events right before the beginning of Mad Max: Fury Road, my excitement was off the charts. I mean, so off the charts that I didn’t even think about the possibility that it might just suck, let alone be anything other than extraordinary.

Imagine the extent of my disappointment at my discovery that a 40-page long issue of a comic managed to undo everything that made Mad Max: Fury Road so fucking awesome. I will admit that I was a bit confused about all the rape panels when I was reading it, but I chose to give the comic a chance and only focused on the good parts. However, it’s been a week since I read it and I only find myself getting enraged at the direction the team took this issue in. In other words, I simply cannot ignore the colossal clusterfuck that is this comic.

If you’ve watched the movie, you already know about the plight of the wives and how it was done spectacularly well without any need of any sexually explicative scenes whatsoever. The comic is a whole another thing entirely and I’m ashamed that it’s even a part of Mad Max: Fury Road because it’s a poorly represented prelude to the actual movie.

First off, showing rapes on panel. While the movie trusted its audience to understand the kind of dire situation the wives were in, the comic blatantly shows said dire situations; not once, not twice, but a few times. What even is that? I tried to get past it but damn it, those panels really cheapened the rapes in a way that’s just gross and highly uncalled for. It’s also very deeply unsettling.

Second, the extremely gendered portrayal of the relationships among the wives. It’s one thing for the wives to be treated like they are, but pitting them against each other with quotes like ‘What would you know?! You’re his favorite.’ is just. Not. Done. I’m so tired of the male gender putting female characters against each other and getting away with it. Of them having one of the wives say ‘you’ve got no balls’ to Furiosa and get away with it.

This comic not only puts focus on what was done to the wives, it also takes focus away from what they managed to do. This kind of double negative really pisses me off. Where is the friendship, where is their unconditional love and care for each other that made the wives so substantial? Why was it reduced to this sham of them being damsels in collective distress who desperately needed saving and regularly turned on each other?

Third, altering the entire character dynamic of Furiosa. Not much is known about Furiosa’s backstory and this comic being about Furiosa totally missed its chance to expand on her in a positive light. Instead of countless other back stories the team could have chosen to go with, they chose to give her a past of sexual assault. Because yes, even the badassest of the badass female characters cannot be empowered unless they have rape for their backstory. Not only that, the wives are shown as being untrustworthy and doubtful of Furiosa because of her gender. Also, Furiosa backhands the brides for not being grateful to all the luxuries that being wives of Immortan Joe grants them. What the fuck? That’s extremely gendered and insulting of the character Furiosa. It’s a disservice that I absolutely do not stand for.

The amount of rape in this comic is so ridiculous that it’s pro-rape culture. The vulgar language (the term ‘rawdog’ has been used), the bizarre supposition that it’s better to live in luxury as a victim of sexual abuse than in adversity and free because one doesn’t want to be a victim sexual abuse, the assumption that women are incapable of respecting each other and working together as equals. That it just takes a single panel for the wives to suddenly see Furiosa as strong, that one of the wives stating that being raped is the same as being ‘infected by poison’ and that virginity is to be seen as something pure and to be highly prized. There are just so many things wrong with this issue, I give up. 10/10 would not recommend.

‘I’m afraid for them. These are fine young women with strong minds. But if they stay here, they will perish, and with them, all hope.’

‘The Immortan had come to believe his own lies…to believe in his omnipotence. The following morning, she would show him the truth.’