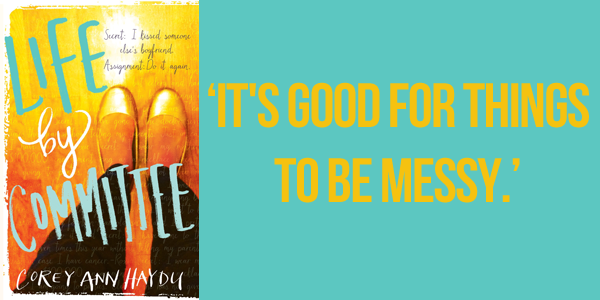 Life by Committee is a messy, messy book. I like messy which is my way of saying that not everyone will be able to stomach it, not everyone will approve of it, and not everyone will like Tabitha. If you’ve the read the blurb, even if just the tagline on the cover, you’d know this book tackles cheating, broken friendships resulting in slut shaming, and secrets. Despite all of that, I could relate to Tabitha, to her struggles, to her lonely, lonely life. But that is not to say that cheating is okay. It’s more about just living life, y’know. Learning from your mistakes. Letting go of stuff. Growing up. Moving on. Being more.

You know when you’re reading a book, you come across all the flaws of a character, you shake your head at them but you cannot stop admiring them? That’s Tabitha for you. I cringed when I first learned that she defaces her books by writing her thoughts in the margins but that’s Tabitha for you. She’s her own person who’s growing up lonely with parents who had her when they were sixteen themselves. It may seem like an über cool life, but it’s life and it’s not easy. Especially not when you fall in love with someone else’s boyfriend.

I like it when books make me think page after turned page about what’s been written. Makes me think in the way that I’ve to stop reading and just feel the words wash over me. To nod along them ’cause at one time those words formed in my mind, too. Life by Committee is one such book. Even more than that, Life by Committee is unpredictable and that’s just a cherry on top of the way it’s been written. It’s all about making a mess of things and of people who make a mess of you for no reason at all other than the jealousy they feel for you. ‘Not every decision can be bigger than the one before. And not every decision is better because a dozen other lost people are telling you what to do.’

Tabitha is going through a difficult time because her best friend abandoned her when she stopped liking the change in her, the change that comes in the form of makeup and harmless flirting with boys. The ex-best friend who judges and judges and judges Tabitha and makes her feel unsure about herself. Luckily, Tabitha has exactly three people in her life who still care about her. Namely, her parents and Elise, the almost new best friend. Then she gets so tangled up in Joe that she goes past the point of wanting him to wanting him despite him being in a relationship. Obviously, she’s not the person anyone should go for an advice and on a subconscious level, she’s aware of that. So when she gets a chance to spill a secret, she goes ahead and soon finds herself in a tangled web of secrets that will only remain safe if she completes every assignment she’s been given in 24 hours.

I didn’t expect Life by Committee to be anything more than just a fluffy contemporary with ugh moments and that’s where I was wrong. It’s like the cover of the book, which I felt was too weird to be a book cover, turned out to be a photo of Tabitha from the knees down which means something. Life by Committee is an amazing book with secondary characters that are as deep and as alive as Tabitha. I’m particularly fond of Star and I hope that Corey Ann Haydu decides to write her story. Really, really hope. There’s a big plot twists that threw me in for the loop as I was so wasn’t expecting that to happen and started laughing at the absurdity of it all. Oh, boy. I really enjoyed it, though.

I don’t know if it’d be stupid to spill your secrets online so that a bunch of strangers can tell you what you can do about them. But the idea appeals to me so much that I would love to be a part of it in actual life ’cause things like that take guts and I’m all for feeling liberated, taking risks, and being reckless. This is what Life by Committee is and this is why I’m freaking amazed by it.

‘It’s good for things to be messy. It’s not necessary to clean your life up all the time. You can let it grow wild.’

‘Keyboards, echoing percussion, and feminine male singers fill the room with sound, and I sing along at the top of my lungs. Dance a little in my chair. Tell my heart to stop leaping in every direction: love, fear, nostalgia, boredom, interest, thrill, loneliness.’