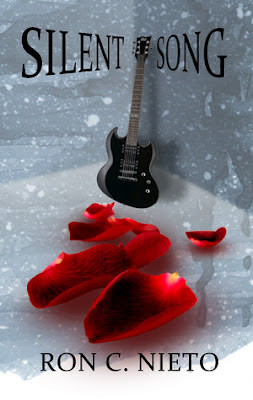 Synopsis
The princess of the school, Alice, is keeping a secret that could strip her of her high school fame. She is obsessed with the school’s outcast, Keith, but not just him – his music.

Since the inspiration for the song hit, Keith can’t get it out of his mind. The song must be played; it demands to be played. He knows the music is changing him, but he is unable to stop it.

Music has the ability to move you, enlighten you, and take you to places you have never dreamed of. And this particular piece? It has a life of its own and makes you forget who you really are.

As Keith and Alice learn of one another to the notes of that one perfect tune, they can overlook their roles and discover who they could be together. But they also discover someone else is listening and intends on keeping Keith to herself, possibly for an eternity.

* * * *
The Review
Some books are hard to review because they are too dull or drab while others because they are too bloody brilliant. Silent Song falls in the latter category. It made me feel a range of emotions strengthening my connection to the story. Silent Song made me smile in contentment, gulp in horror and it pricked my senses. A beautifully written book, I immensely enjoyed reading it from the get go.
Alice is the girl in high school, she’s in the popular crowd. In other words, a princess whose reputation will be tarnished if she so much as speaks with one of the outsiders. But she has a secret which might just ruin her reputation for good. She listens to his music as he plays his guitar crouching under his bedroom’s window. She used to know him, Keith, but he moved away and when he came back to town well, things were too different for them reconnect. So Alice ignored him and he became ‘Dracula in Drag’ with silver-streaked hair and black-painted nails.
Silent Song is all about music and I love books which focus on music all around. The way Ron described Keith’s compositions, the crescendos and decrescendos and most of all how Keith emotions lay bare for Alice. They could never be anything but Alice needs to listen to his music. However, things change when her Lit class veers into a totally different direction for the annual play. From playing Jane Austen’s Romeo and Juliet for the last couple of years, to the school board giving them the green light for Oscar Wilde’s Lady Windermere’s Fan. A very unusual choice at the least.
The class decides to take it a step further and compose an original soundtrack for the play. Lena, another of the in crowd, suggests that they ask Keith to do that. Alice feels happy because now she gets to listen more of Keith’s songs. Keith composes a spectacular piece for the play which helps sets the ambiance for the emotions behind the story. As Lady Windermere, Alice gets to spend time with Keith and listen to his music to perform and give the best rendition of her life. She decides that she would like to befriend Keith which doesn’t sit well with her gang. Then The Incident happens which forces Alice, her BFF Anna and Dave to go their own way away from Lena and the others.
However, that is a minor glitch compared to what’s in store with Keith playing an almost unpleasant song and being unable to stop physically. As much as all of this is out of Alice’s league, she is falling for Keith and cannot see him break down like this over a song. They do some research and what they find is beyond the petty jealousy and hate Lena feels toward Alice.
Silent Song is a story that made me think long after I finished reading it. It is about breaking away from life as you know it so you can go on to grasp what you are really meant for. The feeling of rightness takes but a moment to surface. Silent Song was definitely an unpredictable read for me and I was almost of my chair thinking what would happen next. Beatrice is definitely a character I won’t be forgetting for a long time. Read Silent Song, it is a a very well-written debut by Ron C. Nieto.
Thank you, Ron for writing Silent Song and embracing what you’ve always wanted to be. I knew from the way you write your reviews that you would make one awesome author and Silent Song proves that. I am really proud of you. For my readers, knowing Ron as one of my best blogger friends have not affected my review of Silent Song at all.
Best Quote:

“After a while, the song didn’t end as any other song would. It exhausted its emotions and died out, like a candle without air, and became flat and unresponsive before it shifted, swelling and starting over again. This time it broadcast a mixture of tenderness, loneliness, and pain.”

Ron C. Nieto can be found at

Thanks to Ron C. Nieto and ATOMR for providing me a copy of Silent Song for review.